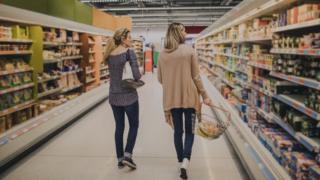 Supermarkets are still offering misleading special offers and discounts despite rules designed to stop this, according to Which?.

The consumer group found “dubious” deals that were worse than they first appeared at most major UK chains.

These included multi-buys that cost more despite the alleged offer, and special offers in which goods are sold at the special price most of the year.

Supermarkets were trying to cut costs for shoppers, the industry body said.

Which? looked at pricing data from May 2018 and June 2019 for 459 products. These spanned seven of the UK’s biggest supermarkets: Asda, Iceland, Morrisons, Ocado, Sainsbury’s, Tesco and Waitrose.

Among the “dodgy” deals it came across was an Iceland multi-buy, where customers were offered two packets of Kellogg’s Crunchy Nut cornflakes for £4, or £2 each.

While this appeared to offer a saving, Which? found that the price was just £1.49 per packet a week earlier – 51p less per item.

However, Which? said the product retailed at £2 for around eight months of the year, with the special offer only lasting about a third of that time.

A previous Which? investigation into misleading pricing in 2015 led the government to roll out new guidance to ensure retailers’ pricing practices complied with consumer law.

The rules state that retailers must ensure the information they present to consumers is fair and does not waste time or cause annoyance, disappointment or regret.

Neither should it cause a consumer to overspend or buy a product that is inappropriate for them.

But Natalie Hitchins, head of home products and services at Which?, said: “Four years on… many of the big supermarkets are clearly still in the wrong, with numerous examples of dodgy discounts and never-ending offers.

“These retailers must stop tricking shoppers with deceptive deals… if not, the CMA must intervene to ensure that pricing guidelines are followed.”

She said that the magazine would report its latest findings to the Consumer and Markets Authority (CMA).

Iceland said it would review its promotional calendar following Which?’s findings, but Asda rejected claims its offers were misleading.

The other supermarkets did not respond to requests for comment.

Meanwhile, industry body the British Retail Consortium said: “Supermarkets seek to provide the best value for consumers on the hundreds of thousands of product lines they sell.

“This is often through promotions and discounts, which can change week to week, even on the same product lines, as retailers seek to cut the cost for shoppers.”