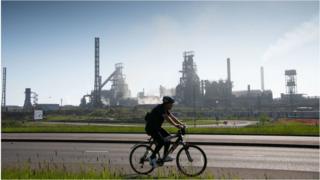 Port Talbot employs just under half of Tata’s 8,385 UK workforce

Tata Steel plans to cut as many as 3,000 jobs across its European business in another bid to come to terms with a “severe” international steel market.

The company wants to focus on higher-value products, it said, adding there would be no plant closures.

About a third of the job cuts will be office-based, it added.

The announcement comes after a merger with German rival Thyssenkrupp was blocked during the summer. Bosses had hoped the deal could reduce costs.

“We plan to change how we work together to enable better cooperation and faster decision-making. This will help us become self-sustaining and cash positive in the face of unprecedented severe market conditions, enabling us to lead the way towards a carbon-neutral future.”

The business employs about 20,000 people and is owned by India’s Tata.

Port Talbot steelworks employs just under half of Tata’s 8,385-strong workforce in the UK.

Wales’ economy minister Ken Skates said: “I am seeking an urgent conversation with Tata to establish what this means for workers in Wales and how we can support those affected by this announcement.”

Last week, Chinese firm Jingye agreed to invest £1.2bn in British Steel as it signed a deal to rescue the UK steelmaker.

It also said it would seek to “preserve thousands of jobs in a key foundation industry for the UK” but did not put a number on how many would be saved.

It has been kept running by the government via the Official Receiver since May when the company went into liquidation.