Tata’s Orb steel plant in Newport is to be mothballed 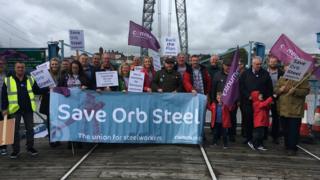 There have been protests against the proposed closure of the plant

Two companies have expressed an interest in Tata’s Orb steelworks in Newport.

Tata is “mothballing” rather than closing the plant as it searches for a new buyer.

BBC Wales understands that Liberty Steel, which has a base in Newport, has been looking at taking over the plant.

US company, Big River Steel, would like to use the site but only with another company operating it.

Tata Steel announced plans to shut the plant in September putting up to 380 jobs at risk.

But the workers at the site – which makes electrical steel used in power transmission and the car industry – will be redeployed to other parts of the business, including Port Talbot.

No compulsory redundancies are expected and a spokesman said workers have been told it was bringing the consultation process to a close.

“We have been working hard to identify alternative jobs at Tata Steel for employees at the Orb business and we remain committed to finding jobs for all those wanting to stay with the company,” he said.

“Following discussions with trade union representatives, we have agreed to mothball the site for a period of time, rather than closing it. This ensures the plant is properly maintained over the coming period.”

If Liberty were to buy the factory then it would operate it. It already has a plant in Newport making steel for the construction and automotive industries and has bought around 10 sites from Tata in recent years. Liberty admitted an interest in Orb when the decision to sell it was made last year.

It is less clear how Big River Steel’s involvement would work in practice.

The company started in Arkansas in 2014 and describes itself as a technology company which “just happen to make steel.” It employs 525 people and, like Orb, it is already involved in electrical steel and has an eye on the electric car market.

There has been a factory at the Newport site, close to the city’s iconic transporter bridge, since 1898. But Orb has not been in profit for four years.

It was put up for sale in May 2018, with Tata wanting to concentrate on its core steel business.

For half a century it was owned by Lysaght before eventually becoming part of British Steel and then European Electrical Steels in 1991. It became part of Tata’s Cogent division in 2001.

Tata estimates it would cost £50m to upgrade the Orb works to allow it to produce the type of electrical steel that would be used in electric cars.

The Welsh and UK governments may be willing to invest in it if a new buyer can be found.

Meanwhile, Tata unions are attending a works council meeting in the Netherlands, over plans to cut 3,000 jobs across its European operations. These are believed to involve around 1,000 jobs in the UK, which employs more than 8,000 workers.

Although the numbers working in the iron and steel industry has shrunk quite dramatically since the 1970s, the proportion of the UK workforce from Wales is now nearly half.