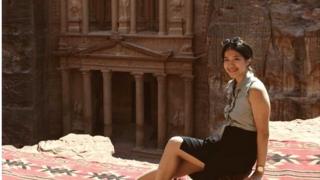 Finding the local stamp dealer may not be everyone’s priority on holiday but for 26-year-old Anita Lo, it’s often the first port of call.

What started at the age of five with her grandfather’s old album and £1 bags of assorted stamps from a charity second hand shop, has swelled to a collection of several thousand which is regularly updated from her travels.

“For many people a stamp is just a stamp; it’s the Queen’s face either first or second class but there is so much more to it,” says the London-based public relations consultant, who once spent £100 on an Olympic-themed stamp in Russia.

“I love scouring antique shops. When I’m in Barcelona or Prague and I am drawn to all sorts of designs; it could be an appealing flower or something from my birth date but I always like to buy in person to check for stains or dog-eared corners which can devalue them massively.”

Not surprisingly, as a younger collector, Anita takes a digital approach to her hobby.

She shares her collection on Instagram and WhatsApp and uses an online catalogue to search for items by price or country, instead of the hard copies traditionally taken to auctions.

However, with its fusty image, her hobby has raised eyebrows amongst her peer group and she admits its “geeky” reputation can leave her feeling conflicted.

“It’s my interest and I do enjoy it but I don’t go to the big trade shows and would never join a club or society; my perception is that they are mainly full of people my parents’ age, are a bit nerdy and I don’t want to be viewed that way. Because I don’t know any anyone else my age doing this, it’s a hobby that I do very much alone.”

By contrast, having set up his own You Tube channel, Exploring Stamps, to interact with fellow enthusiasts 32-year-old Graham Beck is taking a less solitary path.

To date, he has uploaded 70 videos which see him select a stamp at random and explore the history behind it, a journey that has taken him to an Icelandic volcano and the three Statues of Liberty in New York, Paris and Las Vegas.

The South African native, now based in New York, says it is the story behind the stamp that is resonating with the new breed of philatelists (as stamp collectors are known) rather than particular paper types and printing styles which often enthuse the old-school collector.

“I discovered my old childhood album when clearing the attic, and began Googling the images and had this epiphany: I realised how fascinating stamps really are with all this social history documented on these little pieces of paper. They give such a unique perspective on different subjects and that’s what gives it the edge over other hobbies.”

Technology, he says, has been the enabler in establishing their provenance as well as reaching a new audience. His most popular video has attracted 80,000 views, and he sees an online revival in the subject through Twitter and Instagram, and the growing use of multimedia at trade shows, as critical to engaging the next generation.

“We need to capture the excitement of stamps – whether it’s through learning more about them on YouTube or using QR codes on stamp displays at exhibitions that can be scanned with your phone and linked to a video. It may all seem a bit gimmicky to the traditional collector but I’m all for experimentation and encouraging more people to get into collecting.”

It’s a sentiment echoed by George James, Head of Commonwealth at stamp dealer and philatelic publisher Stanley Gibbons in London.

He cites how the little-known world of competitive philately, that sees participants display their collections around the world at shows such as London-based Stampex, has been elevated by more accessible information online.

“The provenance is so much more detailed now; one of my clients is a Boer War collector and he has military mail from besieged towns which he displays along with information on the specific soldier; his photograph, military record, all the context that brings that person to life – philately material is no longer just the envelope.”

With a heritage that dates back to 1856, the rare stamp merchant has been a consistent barometer of the impact technology has had on the trade.

Renowned for its collector catalogues, the recently launched My Collection app enables collectors to store and manage their collection virtually, a move James says has been embraced by traditional collectors.

“I think there’s a perception that because of the traditional demographic of hobbyists, the trade would be resistant to technology but it’s actually the opposite. E-commerce was adopted almost immediately and authentication techniques such as spectral ink analysis have been in place since the mid-’90s.

“With the amount of money involved at the top end of the market, fraud detection technology has become very sophisticated and widely adopted.”

Stanley Gibbons’ in-house experts will check for fake postmarks or other discrepancies around letter size and perforation spacing, and in more complex cases send them onto the The Royal Philatelic Society.

Here, forensic experts will use a video spectral comparator – the software used to authenticate banknotes and passports – to compare the optical properties of ink and spot the clues missed by the naked eye.

And for the collector keen to turn sleuth, a new breed of automated analysis tool is enabling them to check issues with their stamp pre-purchase, often at no cost.

“Image-analysis software, such as Retro Reveal, which can edit the image of a stamp in 50 different ways to expose anything fraudulent, is very widely used across the hobby,” James said.

“It’s another way in which technology has made the trade much more open and fairer. The internet has been the best thing for philately.”