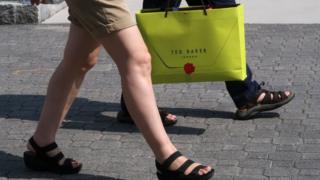 Shares in fashion retailer Ted Baker have plunged 30% after it posted a loss and said trading remained tough.

The firm, which issued a profits alert in June and whose founder Ray Kelvin resigned in March, blamed fierce competition and unseasonable weather.

Its comments came as it reported a £23m loss for the six months to 10 August, down from a £24.5m profit last year.

Chairman David Bernstein said if things did not improve, second-half profits would also be below last year’s.

“Trading conditions have been characterised by unprecedented and sustained levels of promotional activity across the sector with, in several cases, distressed discounting from brands and retailers and heightened competition,” Mr Bernstein said.

In June, Ted Baker’s shares lost more than a quarter of their value after the firm warned investors to expect a fall in first-half profits. It blamed “unseasonable weather” across North America and heavy discounting.

These conditions are continuing Mr Bernstein said. “Trading in the second half has started slowly, not helped by the unseasonably warm weather in September, and this will have an impact on the full year outcome. If these trends continue, we will achieve a second half result below that of last year.”

The trading problems are the latest setback for the firm after Mr Kelvin left in March following harassment allegations.

Mr Kelvin, who had been chief executive since the company’s launch in 1988, resigned over claims he presided over a culture of “forced hugging”. He has denied all allegations of misconduct.