Telegraph owners to put newspapers up for sale

October 26, 2019 by Joshua Marshall No Comments 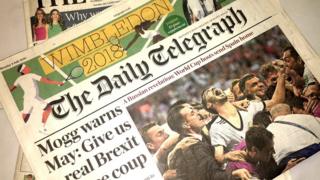 The billionaire owners of the Daily Telegraph and the Sunday Telegraph are to put both titles up for sale.

Sir Frederick and Sir David Barclay are understood to be reviewing all of their key assets, which includes the Telegraph Media Group (TMG).

Figures published on 17 October showed TMG’s profit for the last financial year was £900,000 – a 94 per cent drop on the previous financial year.

The Barclay twins, who bought the paper in 2004, have declined to comment.

There have been rumours of a sale of the Telegraph for several years, which the owners have consistently denied.

Sales of the print editions have plummeted in recent years, with the Daily Telegraph averaging a daily circulation of 310,586. The Sunday Telegraph sells, on average, 244,351 copies.

A source close to the matter told the BBC the brothers were not under any time pressure to sell the paper, which could happen over the next 12-18 months.

No adviser has so far been appointed for the sale but it is expected the Telegraph will be the first asset to be sold.

Aidan Barclay, 63, and Howard Barclay, 59, are thought to be evaluating the family’s businesses on behalf of their father, Sir David Barclay, and his 84-year-old twin Sir Frederick.

The Ritz hotel, which is also owned by the Barclay brothers, is already on the market.

For newspaper owners, the Barclay twins aren’t very media-friendly. They live in the Channel Islands and Monaco – they say – for health reasons and few photos of them exist.

Though the Telegraph newspapers have been struggling with falling circulation and profits, the reason for the sale is understood to be more personal.

The brothers are looking to hand over to the next generation of their large family, where there are differing views about the future of the business.

There have been rumours over the years that several buyers have expressed an interest, including Amazon founder Jeff Bezos and the owner of the Independent and Evening Standard, Evgeny Lebedev.

Its political ally on the right – the Daily Mail – is also thought to be a contender.