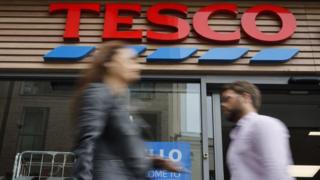 Sales at the UK’s biggest supermarket, Tesco, fell slightly in the months that include the crucial Christmas period.

But stronger takings in the weeks just before the festive period, which included its biggest day to date for food sales, helped bolster performance.

It was the final Christmas under the leadership of Tesco’s boss Dave Lewis, who said the chain had “performed well” in a “subdued” UK market.

Tesco said: “The UK environment has clearly been challenging.”

The supermarket reported that like-for-like sales in the UK, which exclude new store openings, fell by 0.2% in the 19 weeks to 4 January.

In contrast, rival Marks & Spencer reported a rise in sales for the first time since 2017 in the the 13 weeks to 28 December.

M&S said its food departments had a “standout” run in the two weeks leading up to Christmas.

In the 13 weeks before the final week of December, food sales increased 1.4%.

“There was no sign of the post-election rush many had hoped for in the final weeks before Christmas, with shoppers carefully watching their budgets,” said Kantar’s Fraser McKevitt.