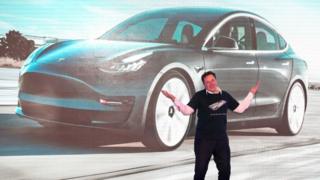 Electric car maker Tesla has become the latest firm to warn of disruption from measures to contain the coronavirus.

Deliveries within China of Tesla’s Model 3 vehicle would be temporarily delayed, a company executive said following an extended production shutdown.

Major motor manufacturers with operations in Asia have reported that the outbreak of the new virus, and measures to limit its spread, are having a negative impact on supply chains.

Tesla plans to restart production on 10 February, according to a social media post on Weibo from Tesla Vice President Tao Lin.

Tesla’s vast new factory, which began operations in October 2019, is a crucial part of its plans to make more than 500,000 cars this year. Its first “Made in China” cars were delivered at the end of last year, marking a major milestone for the company.

The company’s shares have risen sharply in recent months after it posted a rare quarterly profit in October and hit delivery targets.

Last month Tesla replaced Volkswagen as the world’s second most valuable carmaker, after a dramatic rise in share price pushed its market value to more than $100bn.

This week the company’s stock market valuation passed the $150bn mark. It now ranks as the world’s second most valuable car company after Toyota.

China is a major manufacturer of car parts and with factories closed across the country the global motor industry is facing major disruptions to supplies.

On Tuesday Hyundai, the world’s fifth biggest car maker, said that it had shut all of its factories in South Korea because it had run out of Chinese components. Hyundai has said it aims to resume production at the plants early next week.

Other major car makers, including Nissan, Toyota, Honda and Ford, have been forced to temporarily close their operations in China.