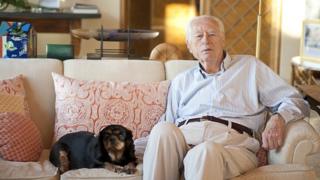 He ran the cardboard packaging firm from 1950 until 1995 when he sold his share in the business to his brother.

The family’s fortune, estimated by Forbes at $12bn (£9.8bn), has supported philanthropic causes in recent years.

However Mr Rausing’s family was hit by scandal in 2012 when his son was given a suspended prison sentence for failing to report the death of his wife.

Hans Rausing’s father Ruben founded packaging giant Tetra Pak, later Tetra Laval, in 1944. The original design for the innovative packaging was a tetrahedron, but later the firm developed the cube-shaped cartons that are now more common.

In the 1980s the Rausing family moved to the UK in order to avoid the higher rate of tax in their home country.

His sons Hans and Gad inherited the business when their father died in 1983, and Hans sold his share in the business to his brother in 1995.

After he left the family firm, Mr Rausing, who lived in Wadhurst, East Sussex, devoted part of his time to philanthropy. More than £1bn was given to causes including innovation and research in medicine, human rights, culture and the environment, his family said.

In 2006 he was made an honorary Knight Commander of the Order of the British Empire (KBE) for his philanthropic activities.