‘The bank sent my safe house address to my abusive ex’ 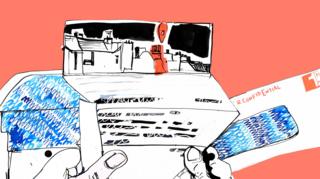 “Claire” had to move house when the bank accidentally sent a letter disclosing her address to her ex husband.

Only after “Claire” left her husband did she realise the extent of the abuse she had endured.

In addition to physical violence, his abusive and controlling behaviour extended to money, too.

“I was the main earner, so would pay for holidays and anything extra,” she says. “The joint account was for bills and the mortgage. After a while he gave up his job. So I was topping up his half from my single account.”

Claire – not her real name – felt she had to take on extra work.

He would tell her she wasn’t earning enough, while his threatening behaviour made her scared to question him. But he was not prepared to give up his lifestyle.

Claire says she left after a bad assault.

“Police took me back to the house after a while. The furniture had gone, what he didn’t want he had destroyed. He’d also taken every personal item of mine that was [proof of] identity. My passport, bank statement, file boxes with bank statements and pensions. I had nothing to prove who I was, I couldn’t really do anything.”

This behaviour is known as “economic abuse”.

Dr Nicola Sharp-Jeffs, director of charity Surviving Economic Abuse, says the vast majority of those who experience a coercive and controlling pattern of abusive behaviour experience economic abuse as a part of it.

But Claire’s experience was made even more harrowing because her bank did not understand what she was going through, or how to support her.

With a domestic abuse charity mentor, she went to a bank branch to get money from her joint account, as she was no longer working. “They couldn’t help me because I had no ID. They kept saying he needed to come because he’d have a bank card, they needed him to prove who I was. We were trying to explain I couldn’t be near him.”

When she finally gained access a few weeks later, everything – tens of thousands of pounds – had gone. “I was devastated. There were direct debits set up which I couldn’t close because they needed two signatures, so I kept having to borrow from my parents and friends.”

The eventual closure of the account wasn’t the end. While at a safe house, Claire says she received a bank letter. “My address and my ex husband’s address were on the top of this letter.”

The bank had accidentally told her violent abuser where she was living, and put her physical safety at risk.

She phoned the bank who confirmed a standard letter about interest rates had been sent to both of them. “I then had to move, because he then knew where I was. I was absolutely petrified. I just phoned everybody and said, ‘Can I come and stay? I can’t stay here.’ I had to plan and move permanently.”

Claire thinks banks could make changes to help people like her. “They didn’t protect me. I think that’s because they didn’t have the knowledge that these things make the difference.”

When Claire was finally able to access the joint account, she discovered that all the money had gone

What can banks do?

The banking industry is trying to look after people like Claire better. “The response by banks and building societies is significant,” says Dr Sharp-Jeffs. “Firstly from a safety perspective. The other thing is understanding the impact. Victims may be left in a financially precarious situation, and the only way to make them safe is improve their financial stability.

“Banks can do lots, like indicate if there are other products in someone’s name they may not be aware of, see whether breathing space from some credit card repayments might be appropriate.”

The Domestic Abuse Bill entered Parliament last month, defining economic abuse as “behaviour that has a substantial adverse effect on another person’s ability to acquire, use or maintain money – or other property, or obtain goods or services”. It is a wider term than financial abuse, potentially including access to housing, food and clothing. However, it is not yet clear if or when it will become law.

A Code of Practice on financial abuse was introduced by industry body UK Finance last Autumn, which has encouraged banks and building societies to improve support in relevant areas, says Dr Sharp-Jeffs. “Since the code was introduced we’ve seen more of a will to address this issue, and actions.”

The BBC asked major high street banks that signed up to the voluntary Code of Practice what they had done. To give a few examples, TSB has a procedure allowing cards and pins to be sent to an address which is not the customer’s registered one, and greater flexibility for customers living in refuges. It will be reviewing procedures around removing a partner from a joint account, which currently requires two signatures.

Santander said it had exceptions in place for customers who need to open an account after leaving an abuser, for example, using a letter from a refuge/shelter manager. It says staff training includes spotting subtle behavioural signs such as a customer being nervous.

HSBC UK customers can request a national sort code that cannot be traced to a particular bank branch, if they are concerned an abuser could use these details to find out their location.

Among Natwest’s measures are protecting the customer’s mailing address, and immediately stopping operations on a joint account where there is a dispute.

Lloyds is starting a dedicated unit focussing on domestic abuse. Its team is receiving training from the Surviving Economic Abuse charity.

Fiona Cannon, director of responsible business at Lloyds Banking Group, describes it as a clear business issue. “All banks will start to look at it now. The most important thing is to believe victims. From that flows a whole range of other activities, you’re able to support them effectively. [For example] even if you want to close a joint account, normally both people need to come into branch together. We don’t expect people to do that now.”

UK Finance said it continues to review the implementation of the code, encouraging best practice approaches across its membership.

Claire had to move house in a hurry. Will future victims of economic abuse get better treatment?