The billionaire retailer whose shops had no stock 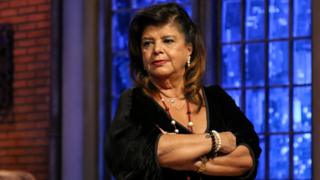 Luiza Trajano has led the family company since 1991

The BBC’s weekly The Boss series profiles different business leaders from around the world. This week we speak to Brazilian retail billionaire Luiza Trajano.

With inflation hitting a whopping 3,000%, and new currencies being introduced and then quickly ditched, it was not easy to be a retailer in the Brazil of the early 1990s.

That was the tough economic backdrop faced by Luiza Trajano, then 40, when she took up the top job at her family’s chain of shops selling home electronics and household appliances in 1991.

The business, called Magazine Luiza, had a small chain in the southern state of Sao Paulo. But Luiza had ambitious plans to expand nationwide. And she had a cunning plan.

With inflation that high, and the Brazilian government introducing and then abandoning no fewer than four different currencies between 1989 and 1994, it would have been risky to start opening more large stores stocking the entire range of products.

The business now has more than 1,000 shops across Brazil

So Luiza decided to open a chain of micro shops that didn’t stock anything. Starting in 1992, customers would instead sit down at a computer terminal, and browse a computerised catalogue of all the items on sale. They would then order what they wanted, and Magazine Luiza would deliver it to their homes from a network of nationwide distribution depots.

It was a precursor to online sales, from a time before Brazil got the internet – access to the net only became available to consumers in Brazil in 1997.

In addition to enabling Magazine Luiza to quickly and cheaply expand, the small “electronic shops” also meant that the company didn’t have to keep printing out new physical price labels in response to inflation or a new currency. It just had to update the prices on its computer system.

Looking back, Luiza, who is now 68, says: “It was a big revolution, we introduced a new way of virtual sales. It prepared us for the internet before anyone else.”

She says that she also made sure that the company put a lot of effort into explaining the expansion plans to staff, to ensure that they were happy and motivated, and therefore offering good customer service.

“We did intense work with our team, explaining our targets and how we need everyone. We were very transparent with how they played an important role in this new movement.”

Luiza says that she loved being a saleswoman

Within three years Magazine Luiza had a few hundred of its shops across Brazil, with some large cities having as many as 58 outlets. Today the company has more than 1,000 stores across Brazil and 30,000 employees. Meanwhile, its website accounts for 48% of sales and it has total annual revenues of 19.7bn real ($4.9bn; £3.7bn).

The success of the business has made Luiza one of the richest people in Brazil. Her net worth is $3.5bn (£2.7bn), according to Forbes magazine.

The first Magazine Luiza shop was opened in 1957 by Luiza’s aunt and uncle, in her home city of Franca, 400km (250 miles) north of the city of Sao Paulo, The word “magazine” was chosen as a variation of the French word for shop, “magasin”, while “Luiza” was also her aunt’s first name.

Luiza started helping her aunt and uncle at the shop from the age of 12, working in the afternoon and early evening after she had finished school. “I was a saleswoman, and it was still a very small shop [at the time],” she says. “I loved the experience, and it was a success.”

When Luiza went to university to study law, she still made time to work at the shop. And after graduating she joined the family business full-time.

Over the next two decades she filled a number of increasingly senior roles, before coming chief executive in 1991, as her uncle and aunt stepped back from the day-to-day running of the business.

Another innovation Luiza introduced was opening the stores very early in the morning during sales periods. This might have long been common practice in the UK and North America, but in 1990s Brazil it was a novel development.

“We opened the shops at 5am, something that we had never seen before in Brazil.” she says. “Other retail shops started to do the same.”

She regularly gives talks about entrepreneurship

Today the company is one of the largest retailers in Brazil. With almost half of sales now coming online, the small non-stock shops have been replaced over the years with larger ones that do have some or all products there to take away. The focus on staff happiness remains though, and Magazine Luiza consistently tops the list of the best Brazilian retail companies to work for.

“We have been in first place since 2006,” she says. “It is one of my greatest joys after all these years.”

While she has no plans to retire, in 2016 Luiza passed the chief executive role over to her son Frederico, while she switched to chairwoman.

When not helping to lead the company she gives regular talks on entrepreneurship. Luiza also helps runs an organisation that promotes women in business, health and education. This body, which she created in 2013, is called the Brazilian Women Group and now has more than 4,000 members.

Fernando Blanco, a professor at EOLAS Business School in Sao Paulo, says Luiza is “an icon among entrepreneurs and also an inspiring speaker”.

“So it is not hard to imagine her power to motivate the commercial team at Magazine Luiza.”

Looking back on Brazil in the 1990s, Luiza says that the country “will always face crises”, and that companies just have to make the best of things.

“Many people believe I’m optimistic,” she says. “But the truth is that my mind is always focused on the solution. Complaining won’t solve the problem, we have to focus on the solution.”

She adds that whatever the economic backdrop “there are two things in common in companies that are a success – customer service and innovation”.