‘The bomb actually landed in the room I had been in’ 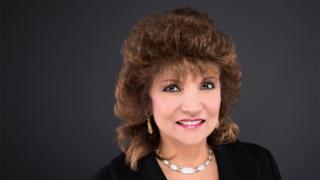 The BBC’s weekly The Boss series profiles different business leaders from around the world. This week we speak to US financial adviser Laila Pence.

Laila Ibrahim and her family had nervously returned to their home beside Egypt’s Suez Canal when the bombs started to fall.

This was back in 1967 when the Six-Day War broke out, with Egypt, Jordan and Syria combined against Israel.

Laila, who was 12 at the time, says that before the conflict started her family “had a wonderful life” in a “very nice house”. But then during breakfast one morning they heard the unfamiliar sound of an air-raid siren, and immediately fled.

They later risked going back to their home to very quickly pack their clothes, but just as they were leaving the property for the second time the siren started up again, and they then heard the sound of a falling bomb.

“The bomb actually landed in the room I had been in,” says Laila. “It destroyed the house.”

Laila and her parents left Egypt following the Six-Day War

Miraculously, the family – Laila, her parents, and her three older sisters – were able to get a sufficient distance away to be unharmed but “lost almost everything”.

Looking back, Laila – who is today a multimillionaire financial advisor based near Los Angeles – says that early terror fuelled her success in life, because it made her fearless. “Once you’ve lost everything, there’s nothing to fear,” she says.

Following the bombing, she and her family moved to Cairo, but found it too crowded and hard to manage. Laila’s parents realised they wanted a completely fresh start, so they decided to emigrate to the US.

Her father was a banker, and he had friends and colleagues in New York, so they applied to settle here. The move was not straightforward though, as a month before they were due to leave he broke a leg.

It was decided that Laila and her mother would initially go on their own, because they were worried that their visas would expire if they waited for her dad to recover. He eventually joined them a year-and-a-half later, while the three older sisters decided to stay behind in Egypt.

When Laila and her mother arrived in Staten Island, one of the five boroughs of New York City, they encountered challenges they never imagined.

“It was really quite a tough time,” says Laila. Neither she nor her mother spoke any English, and short of funds they initially had to share a single room with a Puerto Rican family.

Laila also had to grapple with the cold New York winters, while navigating her new urban commute to school. “I will never forget that,” she remembers. “Not feeling my ears, or my toes, because of the weather, standing there waiting for the bus.”

At school Laila made a friend who was also Egyptian, and this classmate helped her land an after-school job – selling hotdogs on the Staten Island Ferry.

The ferries take workers from Staten Island across New York Harbour and past the State of Liberty to their jobs on Wall Street and other places in Manhattan. And then back again at the end of the day.

“After five o’clock, those people would come running to the snack section [on the ship],” she remembers.

Laila’s first job was on the Staten Island Ferry

During the 25-minute ferry ride back to Staten Island, Laila had to scramble to serve the returning commuters hotdogs and knishes (a street snack similar to a pasty). “I didn’t even know what a knish was,” she laughs. She learned how to serve quickly, with a smile.

The job, which paid about three dollars (£2.50) an hour, helped the family pay its rent. Laila says it also stood her in good stead for her subsequent career in finance, because it taught her the need to always look after her customers. “It taught me how to serve, and what I need to do thereafter,” she says.

When she finished school, Laila crossed the US to study economics at the University of California, Los Angeles. She says that the year-round warm climate suited her more than the harsh weather in New York.

To pay for her studies she worked as a waitress, and started learning the ropes of financial planning. In her last year of university, she found her first client who gave her $20,000 to invest. “And I was so excited, I couldn’t sleep all night long,” she says.

“I couldn’t believe anyone would trust me with $20,000 of their hard-earned money.” She had only been in the country for eight years at the time.

Laila’s first client rewarded her with a longstanding professional relationship. “I had this client for 17 years, before she passed away,” she says.

After university Laila married a man called Dryden Pence, and in 1980 they formed their financial advice business together – Pence Wealth Management.

To build up their client base in the early days, Laila held seminars several times a week. She says she was tough enough to ignore any chauvinism she faced.

“I have dark skin, I’m a foreigner, and a woman. Three strikes, right?” she laughs. “Somehow, I didn’t let that stop me. This was the land of opportunity. [Ultimately], I think people can tell when someone is honest.”

The sexism she faced didn’t end in the 1980s though, as Laila found out when she fell pregnant in 2002. “One man said he was going to take his account [away] because he said I was going to be too busy taking care of my child,” she says.

Laila says she then asked her husband if he thought she would lose any more clients during her pregnancy. “He said to me, ‘anyone that would have that kind of attitude really shouldn’t be your client’.”

After almost four decades of hard work, Laila and Dryden’s company today has 1,500 clients, and more than $1.5bn of funds under its management. Meanwhile, Forbes magazine puts Laila in fourth place in its ranking of the top female financial advisors in the US.

She continues to own and run her company with her husband

Allyson Zimmermann, an executive director at Catalyst, a global research organisation that advises companies on how to build workplaces that work better for women, says Laila’s success has come despite the challenges that women still face in the finance industry.

“One of the key challenges that we see is that women often have to prove performance, whereas men are often promoted based on potential,” says Ms Zimmermann.

While Laila leads a comfortable life in southern California, she still makes time to return to Egypt, and donates to a number of Egyptian charities.

Two years ago she was given an award for her life’s achievements when she attended a conference in Cairo called Egyptian Woman Can. The event explored ways in which Egyptian woman can be better supported.