The clever glass box that reshaped the world 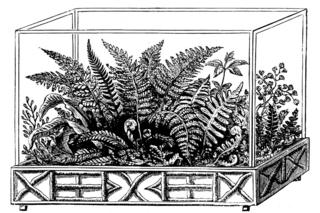 A clever box – designed in the 1830s to help plants survive long journeys – revolutionised much more than botany.

Picture the scene: south-east China, in the early 1840s, and botanist and plant hunter Robert Fortune is “much annoyed” at the paltry collection of plants his Chinese servant has gathered. Clearly, rather than trekking into the hills as commanded, the servant had barely ventured beyond the shore.

Fortune assumed laziness but the servant insisted he’d been told the people who lived in the hills were dangerous. Nonsense, said Fortune, determining to go himself, and rejecting his ship’s captain’s offer to send crew members for protection.

At first, all went smoothly. Foreigners were a rare sight and Fortune drew quite a crowd but it was “generally civil”.

As he later wrote, with “300 or 400 of the Chinese – of both sexes and all ages – looking down upon us with wonder”, he filled a number of precious specimen boxes.

Soon, however, Fortune had been deftly pickpocketed and his servant – “pale with fright” – was surrounded by knife-wielding robbers.

“My poor plants collected with so much care were flying about in all directions,” he added.

But the episode didn’t seem to affect the young Scotsman’s confidence.

Later in the trip, he was warned an area he wanted to sail to was swarming with pirates.

“Nonsense,” he said again. “No pirates will attack us.” You can probably guess what happened.

Nevertheless, the fortunate Fortune did eventually make it back to Shanghai, where he “despatched eight glazed cases of living plants for England”.

He concluded his subsequent 400-page memoir, Three Years Wanderings in the Northern Provinces of China, by noting with satisfaction the Anemone japonica he had transported across the globe was “in full bloom in the garden of the Society at Chiswick”.

So-called “Wardian cases” had been developed in the previous decade, the 1830s, by Nathaniel Bagshaw Ward, a doctor from London’s East End.

He was a fern enthusiast but had struggled to grow them in the polluted city air.

Ward’s invention was simple and, in retrospect, obvious.

Glass, timber, putty, paint – it was essentially a sealed mini-greenhouse. It let the light in. It kept the soot and smoke out. And it kept the moisture in, so there was no need to water the plants.

This was no feat of technology but the result of a questioning mind. It was commonly assumed plants needed the open air. Ward wondered if perhaps they didn’t.

His ferns thrived. And Ward soon realised he might have solved a problem that had long vexed plant hunters – how to keep their plants alive on a long sea journey.

As an experiment, Ward arranged to ship two cases of plants to Australia.

Most ferns were “alive and vigorous” and the grasses were “attempting to push the top of the box off”.

Ward published a book about his invention – On the Growth of Plants in Closely Glazed Cases – and was confident it would have far-reaching effects. He was right – but not in the way he expected.

He thought humans, like ferns, would benefit from being out of the polluted London air and envisaged large sealed greenhouses in which people could convalesce from measles or consumption.

He didn’t foresee his case was about to reshape global agriculture, politics and trade.

Perhaps he should have, because plant hunting had never been about only herbaceous perennials.

The “father of modern plant hunting”, Sir Joseph Banks, was keenly aware of the economic potential of moving crops from one colonial outpost to another.

In the late 1700s, he turned London’s Kew Gardens into a kind of imperial clearinghouse for flora.

It was Banks who caused Capt William Bligh to embark on his ill fated voyage on HMS Bounty, which ended in an infamous mutiny.

Bligh was supposed to deliver breadfruit plants to the West Indies, as Banks hoped they’d become a cheap way of feeding slaves.

Thanks to the Wardian case, the process of transporting plants now had wind in its sails.

Before, according to one commercial importer, they expected 19 out of 20 plants to die at sea.

It was Wardian cases, for example, that spread the Cavendish banana around the world. That’s the variety you see in shops today. William Cavendish was the president of the Horticultural Society.

With prices high, the British Foreign Office sent an enterprising amateur botanist to the Amazon to sneak out some rubber seeds. They germinated in Kew and seedlings were shipped to East Asia. Brazil couldn’t compete with the colonial plantations that grew as a result.

And Wardian cases helped to break China’s grip on the tea market.

Ward published his book in 1847, a few years after Britain won the First Opium War. When the Chinese decided to stop accepting Indian-grown opium in exchange for their tea, the British sent in gunboats to change their minds. You can see why: taxes on tea accounted for nearly a 10th of the British government’s income at the time.

So the East India Company, which virtually governed the subcontinent on Britain’s behalf, decided it needed a backup approach: grow more tea in India.

That meant tea plants needed to be smuggled out of China. And there was only one man for that job.

Robert Fortune had learned on his first expedition that if he shaved his head and wore a wig and Chinese clothes, he could just about pass unnoticed. Suitably disguised, he eventually shipped nearly 20,000 tea plants for his new employers.

But perhaps the most significant impact of the Wardian case wasn’t bringing plants to Europe from more far-flung places – it was enabling more people from Europe to go to far-flung places.

Wardian cases allowed the cinchona tree to be shipped from South America to India and Sri Lanka. From its bark came quinine, which helped ward off malaria.

That made it less scary for Europeans to venture to the tropics; some historians think Africa might not have been colonised without it.

After all, not every traveller was as blithely impervious to risk as the death-defying Robert Fortune.