The Cold War spy technology which we all use 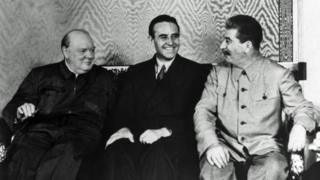 Moscow, 4 August, 1945. The European chapter of World War Two was over, and the US and the USSR were pondering their future relationship.

At the American embassy, a group of boys from the Young Pioneer Organization of the Soviet Union made a charming gesture of friendship between the two superpowers.

They presented a large, hand-carved ceremonial seal of the United States of America to Averell Harriman, the US ambassador. It was later to become known simply as The Thing.

Naturally, Harriman’s office would have checked the heavy wooden ornament for electronic bugs, but with neither wires nor batteries in evidence, what harm could it do?

Harriman gave The Thing pride of place, hanging on the wall of his study – from where it betrayed his private conversations for the next seven years.

He could not have realised that the device had been built by one of the true originals of the 20th Century.

Leon Theremin demonstrating his eponymous musical instrument in Paris in 1927

Leon Theremin was famous even then for his revolutionary eponymous electrical musical instrument, which was played without being touched.

He had been living in the US with his wife, Lavinia Williams, before returning to the Soviet Union in 1938. His wife later said he had been kidnapped. In any case, he was promptly put to work in a prison camp, where he was forced to design, among other listening devices, The Thing.

Eventually, American radio operators stumbled upon the US ambassador’s conversations being broadcast over the airwaves. These broadcasts were unpredictable: scan the embassy for radio emissions, and no bug was in evidence. It took yet more time to discover the secret.

The listening device was inside The Thing – and it was ingeniously simple, little more than an antenna attached to a cavity with a silver diaphragm over it, serving as a microphone. There were no batteries or any other source of power. The Thing did not need them.

It was activated by radio waves beamed at the US embassy by the Soviets. It used the energy of the incoming signal to broadcast back. When that signal was switched off, The Thing would go silent.

Much like Theremin’s unearthly musical instrument, The Thing might seem a technological curiosity. But the idea of a device that is powered by incoming radio waves, and which sends back information in response, is much more than that.

The RFID tag – short for Radio-Frequency Identification – is ubiquitous in the modern economy.

My passport has one. So does my credit card, enabling me to pay for small items simply by waving it near an RFID reader.

Library books often have tags – and not just RFID Essentials, a book I used to research this story. Airlines increasingly use them to track luggage; retailers, to prevent shoplifting.

Some of them contain a power source, but most – like Theremin’s Thing – are powered remotely by an incoming signal. That makes them cheap – and being cheap has always been a selling point.

A form of RFID was used by allied planes during World War Two: radar would illuminate the planes, and a substantial piece of kit called a transponder would react to the radar by beaming back a signal that meant “we’re on your side, don’t shoot”.

But as silicon circuits began to shrink, it became possible to conceive of a tag that you might attach to something much less valuable than an aeroplane.

Much like barcodes, RFID tags could be used to quickly identify an object.

But unlike barcodes, they could be scanned automatically, without the need for line of sight. Some tags can be read from several feet away; some can be scanned, albeit imperfectly, in batches. Some can be rewritten as well as read, or remotely disabled.

And they can store much more data than a humble barcode, enabling an object to be identified as not just a particular type of comfort fit size medium jeans, but as a unique pair made in a certain place on a certain day.

RFID tags were used to keep tabs on railway carriages and dairy cattle in the 1970s.

By the early 2000s, large organisations such as Tesco, Walmart and the US Department of Defense started demanding that their suppliers tag pallets of supplies. The endgame seemed to be an RFID tag on everything.

A few enthusiasts even implanted RFID tags into their bodies – enabling them to unlock doors or ride the subway with a wave of the hand.

In 1999, Kevin Ashton, from fast-moving consumer-goods company Procter and Gamble, coined a phrase perfectly calculated to capture the excitement: RFID, he said, could lead to “the internet of things (IOT)”.

But the hype about RFID faded as attention moved to shiny consumer products: smartphones, introduced in 2007, smartwatches, smart thermostats, smart speakers and even smart cars.

All these devices are sophisticated and packed with processing power – but are also costly and need a substantial power source.

When we debate the internet of things today, we usually refer not to RFID but to these devices, a world of highly-engineered complexity in which your toaster talks to your fridge for no good reason, and remotely-operated sex toys can reveal information about habits which most of us might regard as rather intimate.

Perhaps we should not be surprised: in the age of what sociologist Shoshana Zuboff calls “surveillance capitalism”, privacy violation is now a popular business model.

But amid all this hype and worry, the humble RFID continues to quietly go about its work. And my bet would be that its glory days are ahead.

Ashton’s point about the internet of things was simple: computers depend on data if they are to make sense of the physical world rather than just cyber-space – to track, to organise and to optimise.

Human beings have better things to do than type in all that data – and so objects need to be built that will automatically supply that information to the computer, making the physical world intelligible in digital terms.

Many humans now carry smartphones – but physical objects do not. RFID remains an inexpensive way to keep track of them.

Even if all many tags do is to nod to a passing RFID reader and say “right here, right now, this is me”, that is enough for computers to make sense of the physical world.

RFID may not have the power and flexibility of a smartwatch or a self-driving car, but it is cheap and small: cheap enough and small enough to be used to tag hundreds of billions of items.

And no batteries needed. Anyone who thinks that does not matter should remember the name of Leon Theremin.