The island struggling to secure its future 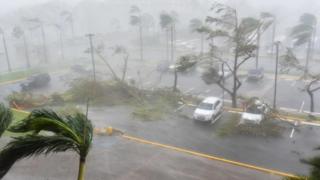 “It was like a bomb had been thrown,” says Carlos Rivera-Vélez.

The chairman of Puerto Rico’s Medical Technology Industry Association is recalling the events of 20 September 2017, when the Caribbean island was struck by Hurricane Maria.

About 2,975 people died in the aftermath of the storm that hit the US territory, which is just 110 miles long and 35 miles wide.

“I wasn’t able to reach my company’s site for three days,” says Mr Rivera-Vélez. “The communication towers were twisted, roofs were torn out. There was a lot of debris in the roads.”

As well as the human tragedy, there was disruption to the already-fragile economy of what is officially the Commonwealth of Puerto Rico.

Puerto Rico had been declared bankrupt just a few months earlier in May 2017, after running up $120bn (£90bn) of debts including pension liabilities. Stuck in an economic downturn, Puerto Rico could no longer cope with the $3.5bn a year it cost to make payments to creditors.

In the decade prior to Maria, Puerto Rico had in fact only recorded one year of economic growth – in 2012 when its economic expanded by 0.5%.

Causing an estimated $100bn of damage, the hurricane forced a rebuilding of the island’s infrastructure and buildings, which allowed Puerto Rico to register 4% growth in the financial year to July 2019.

However, it is only expected to be a temporary respite for an economy with a declining population. The number of people on the island is falling because the inhabitants hold US passports, which enable them to work on the mainland.

Robert Wood, principal economist, Latin America and the Caribbean at the Economist Intelligence Unit, reckons the economy will decline again in the next two years.

“The post-hurricane reconstruction-led rebound in the fiscal year 2018/9 is now petering out, and the economy is returning to its secular [long-term] decline, amid emigration and an erosion of competitiveness.”

The economy has been stuck in a downward spiral since tax breaks that had helped boost the manufacturing sector – largely pharmaceuticals – were ended in 2006 after a phased withdrawal of what was regarded as an unfair tax incentive for US firms.

The 1976 tax breaks meant US companies doing business in Puerto Rico were exempt from federal tax, and credited with ensuring all the big names in the pharmaceuticals industry – Pfizer, Bristol-Myers Squibb, AstraZeneca and Novartis – have a presence on the island. It was home to America’s only factory making Viagra – Pfizer’s impotence drug.

“It was almost too good to be true, the tax rates were probably the lowest globally and that attracted a lot of great companies, bringing tremendous benefits to our economy,” says Carlos Del Río, president and chief executive of Puerto Rican firm CHDR Pharmaceutical Consulting Services, and a former senior executive at Pfizer.

The tax breaks had sparked a 20-year boom in the manufacturing sector, accelerating the territory’s transition from an agriculture economy, which had begun in the 1950s as it shifted away from sugar cane production.

But when those tax incentives came to end in 2006, the economy went into decline. By 2017 manufacturing employment had fallen by more than half from its 1996 peak to 73,200, according to official figures.

“We didn’t have any time from one hurricane to the other – there was no electricity, no water, no mobile [phone service], no communications between any place,” recalls Alejandro Díaz Marrero, director of the economic and social planning programme at Puerto Rico’s Planning Board.

“Imagine that, and trying to help people find out about their families, get to work – it was really messy. Nobody had seen this in 80 years.”

The devastation has sparked calls for the island to seek long-term solutions – of its own and at federal level.

The Puerto Rico Oversight, Management and Economic Stability Act (Promesa), passed by the US Congress in 2016 to set up an “oversight board” to preside over its economy, earlier this year announced debt restructuring plans that could allow the island to exit bankruptcy in 2020.

According to José Caraballo-Cueto, associate professor at the University of Puerto Rico, the US could do more to help by making a change to the Jones Act, which dates from 1920 and requires ships travelling between US ports to be built in the US. This is regarded as a hindrance to trade.

Efforts to modernise the creaking power system have already been announced. Electricity costs more than twice the US state average and can be a barrier to luring firms in the pharmaceutical and medical sector.

“It’s not as unreliable as on other Caribbean islands, like the Dominican Republic, but there are still regular blackouts,” says Adrian Perez, a San Juan-based independent economist and consultant.

The pharmaceutical industry also needs to adapt. Jose Villamil, chairman of economic and planning consultancy Estudios Tecnicos, says it needs to move from manufacturing to having more technicians and clinical testing.

“It will be much different – more technology – and research-intensive, and the line between manufacturing and advanced services such as IT will be hazier.”

The UK’s AstraZeneca, which operates a factory in Puerto Rico, says the workforce is “educated, bilingual, experienced in many technologies, and with vast knowledge of US and global regulations”.

Yet it is also one that moves easily. Some think that further falls in the population, currently some three million, are one solution to the economy’s problems.

“There are too many people for its economy,” says Matt Fabian, a partner at Municipal Market Analytics.

Rather than being dependent on tax credits from the US, Mr Fabian says the island needs something that is “home grown”, such as converting to solar, and building desalination plants to ensure fresh water supplies.

Mr Villamil already sees policy shifts, with the government backing tech start-ups for instance. “It won’t have an immediate impact but it will in five to seven years. That’s a huge change from a tax-driven incentives programme, which Puerto Rico relied on for decades.”