The long history of solar power 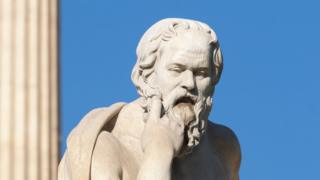 The classical Greek philosopher Socrates believed the ideal house should be warm in winter and cool in summer. With clarity of thought like that, it’s easy to see how the great man got his reputation.

At the time, such a desire was easier to state than to achieve, yet many pre-modern civilisations designed buildings to capture sunlight from the low-hanging winter sun, while maximising shade in the summer.

All very elegant but that’s not the sort of solar power that will run a modern industrial economy. And millennia went by without much progress.

A Golden Thread, a history of our relationship with the sun published in 1980, celebrates clever uses of solar architecture and technology across the centuries, and urged modern economies wracked by the oil shocks of the 1970s to learn from the wisdom of the ancients.

For example, parabolic mirrors – used in China 3,000 years ago – could focus the Sun’s rays to grill meat.

Such systems now meet about 1% of global energy demand for heating. It’s better than nothing, but hardly a solar revolution.

A Golden Thread only briefly mentions what was, in 1980, a niche technology: the solar photovoltaic (PV) cell, which uses sunlight to generate electricity.

The photovoltaic effect isn’t new. It was discovered in 1839 by French scientist Edmond Becquerel, when he was just 19.

These early cells – made from a costly element named selenium – were expensive and inefficient.

The physicists of the day had no real idea how they worked – that required the insight of a fellow named Albert Einstein in 1905.

But it wasn’t until 1954 that scientists at Bell Labs in the US made a serendipitous breakthrough.

By pure luck, they noticed that when silicon components were exposed to sunlight, they started generating an electric current. Unlike selenium, silicon is cheap – and Bell Labs’ researchers reckoned it was also 15 times more efficient.

These new silicon PV cells were great for satellites – the American satellite Vanguard 1 was the first to use them, carrying six solar panels into orbit in 1958.

The Sun always shines in space, and what else are you going to use to power a multimillion-dollar satellite, anyway? Yet solar PV had few heavy-duty applications on Earth itself: it was still far too costly.

Vanguard 1’s solar panels produced half a watt at a cost of countless thousands of dollars.

By 2016 it was 50 cents a watt and still falling fast. After millennia of slow progress, things have accelerated very suddenly.

Perhaps we should have seen this acceleration coming.

He published research demonstrating that the more often a particular type of aeroplane was assembled, the quicker and cheaper the next unit became.

Workers would gain experience, specialised tools would be developed, and ways to save time and material would be discovered.

Wright reckoned that every time accumulated production doubled, unit costs would fall by 15%. He called this phenomenon “the learning curve”.

Recently, a group of economists and mathematicians at Oxford University found convincing evidence of learning-curve effects across more than 50 different products from transistors to beer – including photovoltaic cells.

Sometimes the learning curve is shallow and sometimes it is steep, but it always seems to be there.

In the case of PV cells, it’s quite steep: for every doubling of output, cost falls by over 20%.

And this matters because output is increasing so fast: between 2010 and 2016 the world produced 100 times more solar cells than it had before 2010.

Batteries – an important parallel technology for solar PV – are also marching along a steep learning curve.

And any new product needs somehow to get through the expensive early stages. Solar PV cells needed to be heavily subsidised at first – as they were in Germany for environmental reasons.

More recently China seems to have been willing to manufacture large quantities in order to master the technology.

This led the administration of previous US President Obama to complain that, rather than being too expensive, imported solar panels had become unfairly cheap.

Solar panels are particularly promising in poorer countries with underdeveloped and unreliable energy grids and plenty of sunshine during the day.

When Indian Prime Minister Narendra Modi assumed office in 2014, for example, he announced ambitious plans to build large utility-scale solar farms – but also to establish tiny grids in rural villages with little or no access to the main grid.

But now that solar PV has marched along the learning curve, it is competitive even in rich, well-connected areas.

As early as 2012, PV projects in the sunny US states were signing deals to sell power at less than the price of electricity generated by fossil fuels.

That was the sign that solar power had become a serious threat to existing fossil fuel infrastructure, not because it’s green but because it’s cheap.

In late 2016 in Nevada, for example, several large casino chains switched from the state utility to purchase their power from largely renewable sources.

This wasn’t a corporate branding exercise: it was designed to save them money, even after paying $150m (£122m) as a severance fee.

The Sun does not shine at night, and winter storage remains a big challenge. As Socrates warned us: the wisest people understand that they know nothing.

Socrates notwithstanding, that sounds like a recipe for success.