The map store boss who took the long route 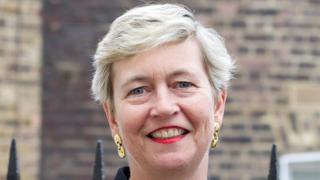 Vivien’s family has owned Stanfords since 1946

The BBC’s weekly The Boss series profiles different business leaders from around the world. This week we speak to Vivien Godfrey, chief executive of maps and travel books retailer Stanfords.

You’d imagine that any secret service worth its salt would be interested in who buys what maps from specialist UK retailer Stanfords.

Home to the world’s largest collection of maps, travel books and globes, its customers include governments and armed forces from around the world.

So if two countries really don’t get along, and one of them is buying a lot of detailed maps of the other from Stanfords, it might be time for alarm bells to be going off in the second of those two nations.

“We have a number of military customers around the world,” says current boss Vivien Godfrey diplomatically.

Based in Covent Garden, in the centre of London, family-owned Stanfords is a 166-year-old British institution. Opening its doors in 1853, it harks back to the great expeditions of the 19th and early 20th Centuries.

Its famous customers from that time included David Livingstone, who explored much of Africa, and Ernest Shackleton, who led expeditions to Antarctica. Even fictional character Sherlock Holmes was a fan.

Vivien, 58, has been chief executive and chairman of Stanfords since March 2018, but her connection to the business has been a lifelong one. Her family have been majority owners since 1946, and she is now the third generation to lead the company. She describes Stanfords as having “been part of my entire life”.

However, when she graduated from Oxford University with a degree in geography in 1983, her father wouldn’t let her join the family firm.

“He very firmly told me ‘no, you should go off and work for other companies, and get other experiences’,” she recalls. “He said that at some point I was going to get more involved in the Stanfords business, and I would be more valuable if I had other experiences.”

So after Oxford she spent seven years working for management consultancy group McKinsey, where she helped clients “almost entirely in retail and consumer goods”. “Part of the reason I asked to work almost solely with retail clients was that I thought it would give me the greatest benefit [for Stanfords in the future],” she says.

In 1991 she moved to US, where she spent eight years based in Minnesota, working for then retail group Grand Metropolitan (later Diageo). Two of the main brands she focused on were canned vegetables business Green Giant, and ice cream subsidiary Haagen-Dazs.

Vivien’s decision to finally take up the top job at Stanfords 19 months ago came as the business was having some difficulties. Its old, three-storey store on Long Acre, Covent Garden, which had been open since 1901, was by then far too big for the company. As a result, Stanfords was making a loss, and its future was at risk.

The company’s former chief executive had resigned, and Vivien had tasked herself with finding both a replacement boss, and a new, smaller premises. But as she got more involved, she says she realised that it was finally time for her to take up the top position.

“I just felt that it was the right moment, that I was ready to do this,” she says.

So taking charge she successfully found a new smaller premises for Stanfords’ main store, in a new development just 100m away. The company moved in January of this year. Vivien adds that the business, which is set to see revenues of up to £10m in its current financial year, has already now returned to profitability.

“We are now trading in roughly 5,000 sq ft (465 sq m) and previously we were at about 7,000,” she says. “Some of our regular customers were disappointed. But when either I, or members of staff, explained to them that it was a question of either remaining where we were and going out of business, or leaving and thriving, everyone understood.”

While Stanfords has long had an online and telephone sales operation, bricks and mortar still account for 80% of its sales. In addition to its core London shop, it has a second store in Bristol, and an outlet at the headquarters of the Royal Geographical Society, also in the UK capital.

Another small store also recently opened in a new market development in Covent Garden, and a shop is planned for Manchester. Currently the business employs 55 people.

“Bricks and mortar retailing still has a bright future, but the shops have to be the right size,” she says. “That is key.”

Now exporting 20% of its maps, travel books and globes, Vivien says that maps make up between 40% and 50% of its turnover. And that the split between physical and digital maps is half and half.

Vivien says she is untroubled by Google offering free maps on line. “People will always be happy to pay for really detailed, really specialist, made-to-order maps,” she says. And she is dismissive of online-only retailers like Amazon. “We pride ourselves on offering the best possible customer service, Amazon offers none.”

“We are constantly being reminded of the frailties of the retail sector in the face of the seemingly inextricable growth of online sales by companies such as Amazon,” he says. “However, a major advantage that Stanfords has in the highly competitive book sales sector is its heritage. The store is an attraction for tourists and Londoners alike.”

With many of Stanfords’ customers about to go travelling overseas, Vivien says that the company is set to launch a carbon offsetting scheme. She say she will be using this herself, as her family home is in Fort Lauderdale, Florida.

She and her American husband moved to Florida in 2001 when they purchased a business called Bluewater Books and Charts, which Vivien describes as “the Stanfords of the sea”.

While her partner continues to run Bluewater, she spends three weeks out of every four in London leading Stanfords. “It obviously isn’t ideal,” she says. “But we email each other every morning to say what we are up to that day, and then we Facetime every evening.”

Regarding the military customers, Vivien says that while they all switched to digital maps 10 or so years ago, they are now rushing back to paper ones.

“You just don’t get any perspective if you are looking at a map on a small screen,” she says. “And the batteries on handheld devices run out, especially in very cold environments.”