The Mini at 60: Fans share their pictures of the little car 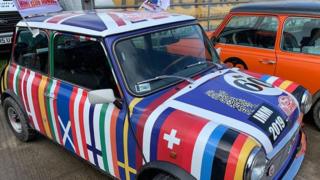 A commemorative Mini at the International Mini Meeting in Bristol, 2019

As the Mini reaches its 60th birthday on Monday, we take a look at some of your pictures of the iconic little car.

Originally designed by Sir Alexander Issigonis for the former British Motor Corporation, the small car has become a big star over the years – especially in films such as The Italian Job.

One thing that has not changed is that it is still made in Oxford, by BMW. 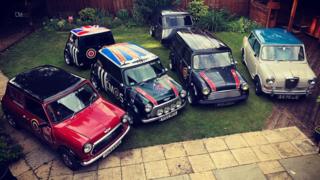 Chris Moss, from Lincoln, does not only have one, but six with the oldest being a 1962 Wolseley Hornet (far right in the picture).

He says his love of the brand started when he was 17 and managed to save enough money to buy and restore a “wreck”.

Chris tells us: “I spend much of my time, and money, working on the cars. It is not a cheap hobby, but when you love something it’s worth it.”

Sarah Nicoll grew up in a household where both her parents owned Minis, so it was only a matter of time before she bought one of her own.

Starting with Gerry, a Hawaiian blue Mini, and Eddie, a red vehicle, Sarah and her partner started an enthusiast group last year.

Jack Parker and his girlfriend Ria recently attended a Mini In The Park event at Mallory Park in Leicestershire.

“I’ve attended loads of car shows and because of that I’ve met lots of new people,” says Jack, who has owned the car for four years.

Tom Shorrock had to save hard to buy his first Mini when he was 16 and had just started work as an apprentice electrician.

He remembers that the vehicle was orange with a black roof as well as matching interior.

Years later, Tom still loves the brand, describing driving his car as an escape from stress.

“I love Minis for the conversations they start, the heads they turn and the feeling I have when I drive the car.”

Jay and June’s daughter Willow is continuing a family love of the classic vehicle.

Over the years, Jay has owned a Cooper S as well as a John Cooper Works.

“I test drove a Cooper when I was in college, and fell in love from there.”

A variety of classic Minis were on show at the recent International Mini Meeting in Bristol.

The event featured a birthday party for the little car along with some celebrity friends, including Mr Bean.

And a landmark birthday would not be complete without a cake, this one was baked in Venezuela by Mini fan and Instagram baker @blogeunapastelera.

Mini fan Dilina Liyanage shows the little car’s appeal has travelled far and wide as he poses in this one with his friends in Sri Lanka.

And finally, George the Mini shows that a Mini is lovable whatever the size.