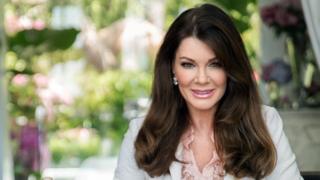 Lisa Vanderpump is a well-known celebrity in the US

The BBC’s weekly The Boss series profiles different business leaders from around the world. This week we speak to entrepreneur and reality TV star Lisa Vanderpump.

Lisa Vanderpump says she has appeared in more reality TV programmes than anyone else.

She could very well be correct, having more than 340 episodes of The Real Housewives of Beverley Hills, and her own spin-off programme Vanderpump Rules, under her designer belt.

While many people outside of the US may not be aware of her, the two shows often vie with each other to be the top-rated cable television programme on the day they go out.

Their success has made Lisa one of the biggest British stars to have cracked the American market. But at the same time as her TV commitments – often at exactly the same time – the 58-year-old and her husband Ken Todd, 74, run a restaurants and property empire.

Born in London in 1960, Lisa’s unusual surname is her real birth one, and Dutch in origin.

She and her husband have amassed their fortune over the past 37 years.

They met in London in 1982 when she was 21, and he was 37. She was an actress, and he was a nightclub owner. Within six weeks they were engaged, and in under three months they were married.

Soon the newlyweds were buying and selling London homes, before they opened several high profile restaurants and bars around the Soho area of the UK capital. These included some of the most prominent London gay bars of the 1990s.

Since then they have sold the initial London venues, and they now primarily operate a chain of restaurants and bars in California and Nevada. They moved permanently to Los Angeles from the UK in 2005.

Lisa and Ken got married within three months of first meeting

Lisa was thrust into the limelight when the Real Housewives of Beverley Hills first aired in the US in 2010. She has since gained a vast social media presence, with 1.8 million followers on Twitter, and 2.4 million on Instagram.

“I’ve been on The Real Housewives of Beverley Hills for nine years,” she says. “Twitter and all that social media, was exploding at the time I came to the forefront, and I think that changed everything.”

While Reality TV is full of stars promoting products, few have taken it as far as Lisa. For example, one of her restaurants – Sur – was launched in one of the most dramatic episodes of The Real Housewives.

The entire seven series of the spin-off show Vanderpump Rules are set at the restaurant, and follow the comings and goings of its famously good-looking young bar staff and waiters. It is product placement to the maximum.

Customers who go to Sur are interacting with the characters whose personal lives they have followed every week on TV. Madeline Berg, a media writer at Forbes magazine who follows the fortunes of reality TV stars, says this is a fusion of entertainment and commerce akin to the Disney theme parks.

She puts Lisa’s success down to her having had a long business career before joining the reality TV programmes, Ms Berg says this means that Sur, and Lisa’s other televised business ventures come across as authentic.

“You can tell when someone really believes in something rather than doing an endorsement for a few thousand bucks,” says Ms Berg.

Lisa puts forward the same argument. “For me the product has to be good,” she says. “If I’m suddenly going to say ‘oh look, here I am, and I’m developing a swimming pool cleaner’, everyone’s going to say it’s rubbish.”

She says that the restaurant sector is a tough one to be successful in, and she ensures that her staff are always as friendly and welcome as possible. “You must always put a smile on your face in the hospitality industry, you must always be kind and generous,” she says.

The couple run their business empire together

Lisa and Ken now own four restaurants in Los Angeles, and she says that having an attention to detail is also key. “I can go in [to a venue] and spot something straight away if it is not right,” she says. “I might turn the music up just a notch, or turn the lights down.”

In recent years the Vanderpump empire – which is now very much a family affair – has expanded into new areas.

Their daughter Pandora and her husband Jason – whose courtship and marriage featured in the Real Housewives of Beverley Hills – look after a line of Vanderpump rosé wine. And Lisa also runs a pet accessories business.

Her love of dogs is, in fact, a regular feature in the TV programmes and her life in general. She runs a charity called the Vanderpump Dog Foundation, which works to rescue stray dogs in the Los Angeles area and get them re-homed, and campaigns globally against cruelty to dogs.

Lisa is a prominent campaigner against the Yulin dog meat festival in China. To help raise money for the foundation she organises an annual gala.

She also uses her fame to campaign for gay rights, and to raise more awareness of the risk of suicide. Her older brother took his own life in 2018.

Lisa is often pictured with her pet dogs

After nine years on Real Housewives, Lisa won’t be returning for season 10, which starts in 2020. This led to much press speculation that some of the other women on the show were jealous of her popularity, and specifically that of her spin-off show.

“I think the success of Vanderpump Rules stimulated a lot of feelings,” she says. “And sometimes being voted the most popular housewife creates feelings.”

When asked about one of the other housewives describing being friends with her as like playing chess against late grandmaster Bobby Fischer, she replies: “Am I smart? Well I hope so, but I don’t think strategically with friends.”

While some people look down on reality TV, feminist US academic Camille Paglia says that Real Housewives is excellent documentary making, and that Lisa is a “superb role model for professional women”.

“Her work ethic, discipline, taste, and dignified formality have set a high standard for American businesswomen,” says Prof Paglia. “I have always felt that she has the stage presence and ambiguous reserve of a James Bond grande dame.”

Lisa herself identifies as a businesswoman first and foremost. “I was running businesses prior to reality TV. So it is not like ‘oh I’m a celebrity’, I hate saying that about myself.”