The UK cities where rent is rising the fastest 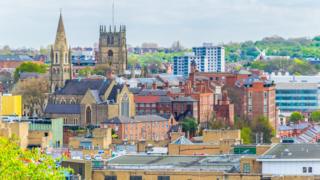 The cost of renting a home rose fastest in Nottingham, Leeds and Bristol in the past year, research indicates, while Aberdeen recorded the biggest fall.

The survey, from property website Zoopla, said tenants moving into a Nottingham home this summer paid 5.4% more in rent than a year earlier.

Leeds and Bristol (up 4.5%) were the only other UK cities where rents rose faster than UK average wage growth.

Part of the reason lies in an increase in the number of people buying their first own home, relieving some of the pressure on the rental sector.

Tenants moving in Aberdeen – where the local economy is affected significantly by the oil industry – saw rents drop by 4.1% in the third quarter of the year, compared with a year earlier.

Nearly three-quarters of 16 to 24-year-olds and almost half of 25 to 34-year-olds rent from a private landlord, according to the government’s Family Resources Survey.

The sector is concentrated in London, with about a third of rental properties in the UK found in the city. This is also where the typical rent per month is the most expensive.

The Zoopla report suggests that the typical tenant in the UK spends nearly a third of their earnings on rent (31.8%), slightly less than the peak in 2016.

Outside of London, tenants spent the highest proportion of earnings in Oxford, Brighton and Cambridge, with the lowest in Hull, Bradford and Stoke.

UK-wide rental prices are up by an average of 2% in the last year, which is about half the typical level of wage rises.

“Renting is more affordable today than the 10-year average. [An increase in] first-time buyers, 80% of whom exit the private renting sector to buy, has also moderated rental demand,” said Richard Donnell, of Zoopla, which has based the figures on its listings and other data.

Across the UK, homes take an average of 17 days to rent, based on the time between a listing being posted and removed. This is down from one year ago, when homes took 19 days to rent, and much shorter than the time it takes to sell a property.