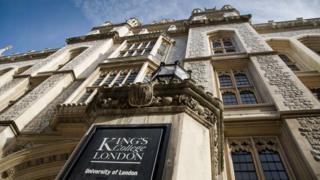 King’s College in London received £2m from members of the Sackler family, whose pharmaceutical firm is accused of helping to fuel the US opioid crisis.

The Dr Mortimer and Theresa Sackler Foundation gave £5.2m to mostly UK universities and charities in 2018, according to its latest accounts.

King’s College was the top recipient, followed by the University of Sussex which received grants totalling £1.4m.

Since awarding the funds, the billionaire Sackler family’s firm, Purdue Pharma, has filed for bankruptcy to deal with thousands of lawsuits stemming from its prescription opioid painkiller OxyContin.

The Centres for Disease Control and Prevention said that opioids, which also include drugs such as heroin and Fentanyl, are the biggest cause of overdose deaths in the US and in 2017 claimed 47,600 lives.

King’s College said the donation from the foundation “represents a continuation of funding to support the work of Professor Declan Murphy”.

It said: “His work crucially looks at understanding how a healthy brain develops across the lifespan; transforming understanding of common disorders like ASD, ADHD, epilepsy and Down’s syndrome, and addressing the developmental causes of antisocial behaviours that pose a key societal challenge.”

The University of Sussex said the grant from the Dr Mortimer and Theresa Sackler Foundation “has supported our centre which informs critical clinical interventions to a wide range of neurological and psychiatric disorders, such as depression, schizophrenia and dementia”.

The Wall Street Journal estimates the Sackler family received as much as $13bn (£10bn) in profit from Purdue Pharma, according to court records.

Under the terms of the bankruptcy deal, Purdue will be dissolved and the money raised will go towards settling the lawsuits.

At the time it was announced, Sackler family members said: “It is our hope the bankruptcy reorganisation process that is now under way will end our ownership of Purdue and ensure its assets are dedicated for the public benefit.”

The Sacklers are prolific philanthropists who have given millions of dollars to the arts, education, medicine and charities mainly in the US and the UK.

Earlier this year, however, a number of high profile art galleries announced that they would no longer accept money from the family.

They include National Portrait Gallery and the Tate in London as well as the Metropolitan Museum of Art and the Guggenheim Museum in New York.

The Roundhouse, the music and arts venue in London, had been awarded £1m in 2018 from the Sackler Trust.

But a spokesperson told the BBC that the Roundhouse had made a decision “not to accept the donation at this time”.

“To do so risks distracting from our work with young people, and that’s our priority.”

In March, the Sackler Trust and the Mortimer and Theresa Sackler Foundation announced it would temporarily suspend new UK donations.

At the time, Dame Theresa Sackler, chair of the Sackler Trust, said: “I am deeply saddened by the addiction crisis in America and support the actions Purdue Pharma is taking to help tackle the situation, whilst still rejecting the false allegations made against the company and several members of the Sackler family.

“The current press attention that these legal cases in the United States is generating has created immense pressure on the scientific, medical, educational and arts institutions here in the UK, large and small, that I am so proud to support. This attention is distracting them from the important work that they do.”

The University of Sussex said: “This year, and in light of the legal situation in the US, the University and Sackler Trust decided not to progress with further pledges.”