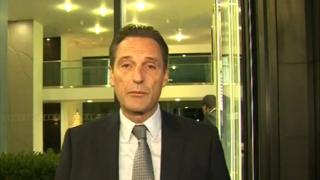 The boss of collapsed Thomas Cook has said he is “deeply sorry” over the historic travel firm’s liquidation.

Peter Fankhauser also told the Mail on Sunday that saying farewell to staff had been “heartbreaking”.

The 178-year-old travel firm collapsed this week, putting 9,000 staff in the UK out of work – and leaving 150,000 British holidaymakers stuck overseas.

But Mr Fankhauser defended the £8.3m he has been paid since November 2014, and denied he was a “fat cat”.

The 58-year-old said around half his remuneration, some £4m, came in the form of share payments, which were now worthless as he did not cash them in before Thomas Cook went into liquidation on 23 September.

“I don’t think that I am the ‘fat cat’ that I am being described as,” he told the newspaper.

It comes as the UK’s Civil Aviation Authority (CAA) gave an update on its efforts to repatriate stranded UK holidaymakers.

The CAA said on Saturday it had operated 69 flights, covering 40 airports at home and abroad, as Operation Matterhorn completed its sixth day.

Operation Matterhorn which runs until 6 October, has returned around 93,000 people so far and plans to run another 70 flights on Sunday.

The size of Mr Fankhauser’s pay and bonuses has attracted criticism from Thomas Cook staff, unions, and politicians.

Business secretary Andrea Leadsom has asked the official receiver, which oversees liquidations, to look at whether bosses’ actions “caused detriment to creditors or to the pension schemes”.

Top directors at the holiday company have been paid a combined £20m in salaries and bonuses since 2014.

Prime Minister Boris Johnson has also questioned whether directors should pay themselves “large sums of money” as their businesses go “down the tubes”.

Meanwhile, Rachel Reeves, chair of the Business, Energy and Industrial Strategy Committee, said that the public was “appalled that as Thomas Cook mounted up debt and as the company headed for trouble, company bosses were happily pocketing hefty pay-packages”.

She also said there were questions to be asked about Thomas Cook’s “accounting practices”, with suggestions that they improved the chances of executives being paid large bonuses.

But Mr Fankhauser said: “That is just rubbish. I shouldn’t say that. But it is just not right.”

He defended his pay saying it was not “outrageous” compared with other bosses in the FTSE 250 index, which Thomas Cook exited last December. He also said pay-packages had been set by the firm’s remuneration committee and approved by shareholders.

Meanwhile, in a separate interview with The Sunday Times, Mr Fankhauser, a Swiss national, appeared to blame a group of banks for not supporting a bail-out plan for Thomas Cook.

He said if bondholders and a syndicate of 17 banks – including Barclays, Morgan Stanley, DNB, UniCredit, Credit Suisse, Lloyds and Royal Bank of Scotland – had acted faster, then Thomas Cook would still be trading.

“The longer the talks dragged on, the more uncertainty grew, increasing the likelihood of a liquidity squeeze,” Mr Fankhauser told the Sunday Times.

“Had we been quicker, we might not be in the situation we are now.”

Thomas Cook had secured a £900m rescue deal led by its largest shareholder Chinese firm Fosun in August, but a recent demand from its banks to raise a further £200m in contingency funding put the deal in doubt.

Mr Fankhauser accused the banks and bondholders of “trading for every point” during what were to be ultimately-unsuccessful funding talks.

He also told the paper: “I think it would be very difficult for me to find another job in the UK.”