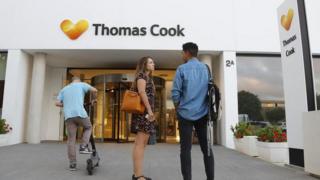 The Thomas Cook brand has been saved from obscurity after the Chinese owner of Club Med said it would buy the name for £11m.

Fosun Tourism, which was seen a potential saviour of Thomas Cook before it went bust, is also acquiring the Casa Cook and Cook’s Club hotel brands.

The hotels are aimed at individual travellers and young holidaymakers.

He said: “The acquisition of the Thomas Cook brand will enable the group to expand its tourism business building on the extensive brand awareness of Thomas Cook and the robust growth momentum of Chinese outbound tourism.”

Fosun was the largest shareholder in Thomas Cook and had pledged to inject £450m into the company as part of a £900m rescue deal with bondholders and banks.

However, the plan collapsed after banks demanded an extra £200m. That triggered Thomas Cook’s liquidation, which put thousands of jobs in jeopardy and led to the biggest peacetime repatriation of UK citizens as holidaymakers were brought home.

It later emerged that the shops had been sold to Hays for just £6m.