Thomas Cook collapse: Customers ‘left in the dark’ over bills and flights 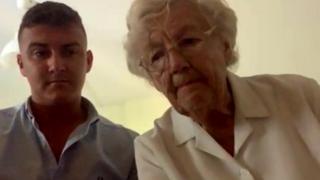 Thomas Cook passenger Mary Nicholls (right), on holiday with her grandson Matt Walker, fears running out of her heart condition medication if she is stranded in Cyprus.

Thomas Cook customers have told the BBC of their fears over unpaid hotel bills, cancelled trips and being stranded abroad following the collapse of the tour operator in the early hours of Monday morning.

For one British family on holiday in Cyprus, the firm’s failure means a wedding marred by uncertainty, and worries over vital medication.

Grandmother Mary Nichols, 87, has a heart condition and only enough medication to last until Wednesday – the day her prescription runs out.

Grandson Matt Walker, 23, paid Thomas Cook about £1,100 by debit card for flights and hotel accommodation for Ms Nichols and his mother Sarah, 53, so they could attend his brother’s wedding in Paphos on Tuesday.

But the family’s excitement has turned to fears they could be stranded, after staff at the Kefalonitis hotel apartments said Thomas Cook had not yet paid for their stay.

Mr Walker, from Poynton, in Cheshire, said: “We are unsure what to expect from the hotel. They’ve got our passports and told us they have not been paid by Thomas Cook.

“We’re the only Thomas Cook passengers here, and they’re not taking any more. We’re not sure if they [the hotel] wants extra money.

“My nan fears if she’s stranded in Cyprus she will run out of the medication she must take daily. She has her medication until Wednesday – even a delay of one day is trouble.”

The family have been given no information about whether flights home will go ahead.

Mr Walker said he fears he will not be able to enjoy his brother’s wedding because of the uncertainty.

He said: “We feel left in the dark – the hotel doesn’t know what’s going on, there’s no Thomas Cook rep and Thomas Cook haven’t contacted us.

“I am going to have to make phone calls on my brother’s wedding day tomorrow and get it sorted out. It’s going to ruin the day because I’m going to be on the phone when I should be enjoying myself.”

Leanne Jones, with one of her young sons, fears £800 worth of Thomas Cook vouchers are now worthless

Back in the UK, mum Leanne Jones has been forced to tell her children that their planned trip to Disneyland in June has been cancelled

Ms Jones said the family were £150 off meeting the £2300 cost of the trip after separately putting money into a holiday fund.

She said she and her partner held off booking the holiday until they had the necessary funds.

She said: “Every birthday and Christmas over the last two years I’ve been saving to take my two young children on their first holiday abroad – Disneyland Paris was the plan.

“We just thought it would be magical for them.

“I stand to lose all the money from the vouchers and my children will no longer get their holiday. After speaking with Atol [A scheme that protects most air package holidays sold by businesses based in the UK] I’ve learned my vouchers are not covered and there is nothing anyone can do to help.

” I’m going to have to start saving again – I have no other option. We’ll have to wait another two years.”

The Civil Aviation Auithority, which runs the Atol scheme, has been contacted for comment about the status of gift vouchers.

What has Thomas Cook said?

In in its latest online statement, the tour operator said “considerable efforts” were made to save the company, but a deal could not be reached over the weekend.

The statement added: “The Company’s board has therefore concluded that it had no choice but to take steps to enter into compulsory liquidation with immediate effect.”