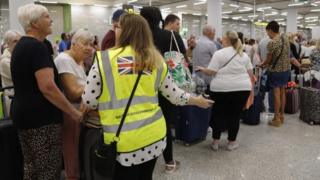 The collapse of Thomas Cook has understandably left many people searching for answers about the impact on their holiday plans.

Here are some of your typical questions, which we have done our best to answer,

Q: “I have paid for flights to Goa in January with Thomas Cook – can I claim the money back from my credit card company? If so, how do I go about this?” (From David Palmer, from Rochdale)

A: Yes, you can, and many will do the same. Contact the credit card company (often a bank) of the card you used, not the processors (Visa, Mastercard etc), and tell them you are making a claim under section 75 of the Consumer Credit Act.

They may ask for more details, and will probably send a claim form. If they flatly refuse, then complain. If there is no success with that, contact the Financial Ombudsman Service.

Q: “Things have become very fraught in the hotel where there was a shouting match with reception and one guest where the hotel was demanding payment. We are now in a situation where we are carrying all our important documents with us at all times given the fear and threat of not getting access to our room. What advice is there?.” (From Clare McSweeney)

A: The Civil Aviation Authority (CAA) says people should not make extra payments. If a hotel is requesting payment from you, you should call the CAA on +44 1753 330 330. CAA staff will talk to the hoteliers, and the CAA may eventually relocate you to a different hotel.

The industry insurance fund Atol, which covers payments in the event of a firm failing, covers bills for rooms and food that have been run up this week.

However, arrears that were built up at hotels before Thomas Cook’s collapse will not be covered by the Atol fund. Affected hoteliers will have to apply to the liquidators for their money.

Q: I booked a flight through Thomas Cook, travelling to Corfu next May. The cost of the flight is not an issue as my card company will likely refund this. In addition I booked a hotel, again on a card. This was a non-refundable deal. However, due to the airline’s collapse I am unable to get a flight from Manchester to Corfu. Do I have any routes available to recover this cost? My travel insurance doesn’t seem to cover this.” (From Nick Enser)

A: If the hotel was booked as part of the same transaction as the flight, you may be protected. You may get some help if it was multiple transactions, but all through the same website visit or call.

If it was done separately, the first thing to do is call the hotel to explain the situation. They have a lot of time to resell the hotel room so may be understanding, particularly if you would only like to change dates. You may want to point them to a recent Competition and Markets Authority (CMA) report.

Generally though, these consequential losses are not covered by card companies nor many insurance policies.

Q: “Myself and 11 other people fly out to Turkey on a golfing holiday next Tuesday, 1 October. We fly out with Jet2 but were due to fly back with Thomas Cook. Would we still qualify for [repatriation flights] despite not being in Turkey yet?.” (From Liam O’Rourke)

A: Repatriation flights are only intended for those who are already on holiday or coming home before the 6 October.

That leaves people in Liam’s position either being flown home (if their flight was before 6 October) or facing the (undoubtedly higher) cost of a return ticket from another company. Refunds generally only cover the cost of the Thomas Cook flight, but your credit card company may offer some extra advice.

Q: “Why is the CAA not using the currently grounded fleet of Thomas Cook aircraft to repatriate, then at the finish impound the fleet?” (From Terry Kirk)

A: The vast majority of the aircraft (all but three old A330s) do not actually belong to Thomas Cook. They were leased by the company, and once it went into receivership the lessors would want to recover them quickly, because they would no longer be receiving payments for them.

Other suppliers and sports packages

Q: We booked in a Thomas Cook store but booked on Expedia. Our Atol certificate covers us if Expedia cease trading, which I assume means our trip is safe? (From Helen Coggan)

A: Thomas Cook travel agents’ doors are shut and locked, but any bookings with different operators should still be valid. It is best to contact those operators directly as they will be prepared to explain the status of the holiday.

Q: “I have a package to Tenerife, booked with Holiday Gems. It includes an outbound flight with Jet2, a hotel (not Thomas Cook), and a return flight with Thomas Cook. Holiday Gems telephoned me last night to advise that my holiday was cancelled. Are they not obliged to find alternative flights home before they consider cancellation?” (From Mike Ward)

A: They do not have to, but as it is a package, you should have an Atol certificate and therefore the right to a full refund.

Some operators which were using Thomas Cook flights may have found alternatives but, if those flights are more expensive, they could only pass on a price increase of up to 8% of the total holiday cost. For any more than an 8% price rise, they would have to offer a full refund.

Q: “I bought four match and accommodation tickets through Thomas Cook Sport for the Liverpool v Brighton match on 30 November. I have paid for the package in full. What are my options? Will I still be able to get the match tickets?” (From Richard Fowler)

A: Liverpool FC has already said it wants to resolve issues for Thomas Cook customers, and will be sending forms for those who were hoping to attend the next couple of games. It said it was awaiting more details before dealing with fans hoping to attend subsequent games.

Other football clubs have been offering replacement tickets or even paying for alternative travel arrangements.

Q: “I booked a holiday with Thomas Cook and started a direct debit although I only paid two months at a value of £310. How can I reclaim the money? My concern is Thomas Cook said in emails that we would receive an Atol certificate 28 days before we travel, thus I am worried we may not be covered (I appreciate there are thousands of people in far worse situations then me).” (From Scott Raspin)

A: Direct debits will no longer be processed owing to the insolvency.

Any money that has been paid towards a package holiday already should be refunded via the Atol scheme, so you will need to make a claim for it in due course, attaching the emails from Thomas Cook which explained when the certificate would be issued.

Q: I always buy my annual travel insurance through Thomas Cook. Does anybody know how people now stand with regards to whether the insurance policies are still valid? (From Terry Feltus)

The BBC has been unable to contact White Horse, but a recorded message on its phone line says that, although busy, it continues to operate as normal.

White Horse is based in the Irish Republic, underwrites policies for various travel operators, and would come under the jurisdiction of the Financial Services and Pensions Ombudsman of Ireland should customers have any complaints.

A: The BBC has spoken to Mastercard about this issue and the message is that cash on the cards is safe.

“The Thomas Cook multi-currency travel card is unaffected by the news of the company’s collapse,” a Mastercard spokesperson told the BBC.

“The safety of your money is not affected as the funds are not held by Thomas Cook, but by Wirecard Card Solutions Limited as the issuer of your card. Cardholders can continue to use their cards as normal.”

Q: “The holidaymakers or insurance companies should pick up the bill. While I am sorry for the people stranded overseas, they should not expect UK taxes to be used to bail them out.” (From David Oxberry)

A: The CAA said its Atol insurance scheme will cover 60% of the approximately £100m cost of bringing people home, with the rest funded by the government, so effectively by the taxpayer.