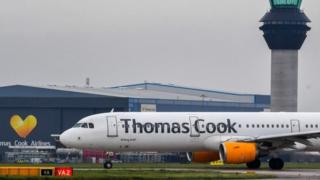 Customers of defunct tour operator Thomas Cook have reacted angrily after learning they will face further delays in getting refunds for Atol-protected package holidays.

The Civil Aviation Authority originally said all valid claims made on the first day of its refund programme would be paid within 60 days, or by this Friday.

But now it says only two thirds will be paid on time.

It said it had asked the remaining claimants for more information.

Customers have reacted angrily on Twitter, with some arguing they should have been made aware from the start that the process could take longer than 60 days.

Others say they have struggled to reach the CAA by phone to get information.

CAA boss Richard Moriarty acknowledged many would be worried about not getting their money back before Christmas.

“We thank consumers for their ongoing patience as we continue to do all that we can to work through the UK travel industry’s largest ever refunds programme,” he said.

“I appreciate that this is a concerning time for Thomas Cook customers who are waiting for their refunds, particularly at this time of the year.”

When Thomas Cook ceased trading on 23 September, anyone who had paid for a future Thomas Cook package holiday protected under the CAA’s Atol scheme was entitled to a full refund.

From 7 October an online refund application system opened, and customers were told the Civil Aviation Authority aimed to pay out within 60 days.

Ahead of the Friday deadline, the CAA said it had received 215,000 valid claims to date and would have paid out more than £160m by this weekend.

But it said the refunds operation had been challenging due to the potential for fraudulent claims, and some 85,000 claims it had received were invalid or duplicates.

It said it had “paused” the 60-day claims period for certain customers, and urged anyone who had been asked for further information to respond at “the earliest opportunity”.

However, the regulator stressed that all valid Atol-protected payments would be refunded, without giving a specific timeframe.

It triggered the biggest ever peacetime repatriation, aimed at bringing more than 150,000 British holidaymakers home. It also put 22,000 jobs at risk worldwide, although some of those roles have been saved.

The refunds process has been rocky, with the CAA’s online form crashing due to high demand on the day it launched.

The website was also targeted by scammers, while many customers have said the long wait for refunds has stopped them rebooking holidays.

The CAA said it had still not received claims relating to around 40,000 of the 300,000 cancelled holidays eligible for a refund.

Customers have until September next year to submit the online form.

Have you been told you will have to wait longer for a Thomas Cook package holiday refund? Are you happy with how the CAA has handled the refunds process, or disappointed? Email haveyoursay@bbc.co.uk.