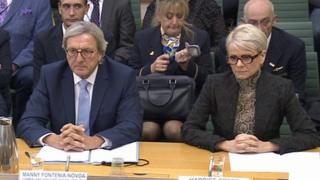 Manny Fontenla-Novoa and Harriet Green were questioned by MPs

A former Thomas Cook chief executive has denied contributing to the collapse of the travel firm.

Manny Fontenla-Novoa told MPs looking into the demise that a series of acquisitions under his watch had not left the firm with unmanageable debt.

But Harriet Green, who succeeded him, told the hearing on Wednesday she inherited a “huge wall of debt”.

The most recent chief executive, Peter Fankhauser, has also blamed debt as a contributory factor in the collapse.

Mr Fontenla-Novoa told MPs on the business, energy and industrial strategy select committee that his strategy, including acquisitions such as a 2007 merger with MyTravel, had left the company “in great shape” for future growth.

When challenged by committee chair Rachel Reeves, who cited evidence to MPs by Mr Fankhauser that he had “had his hands tied” and found his job “impossible” due to the debt, Mr Fontenla-Novoa said: “I can’t accept that, because if Peter felt that, then maybe they should have done something about that debt.

Mr Fontenla-Novoa said that from about 2011, after he had left the business, Thomas Cook “shrank capacity” in real terms by reducing the number of available seats on aircraft or hotel rooms.

Ms Reeves cited Mr Fankhauser’s comments that Thomas Cook could not have grown because it was spending £150m to £170m per year servicing debt.

However, Mr Fontenla-Novoa said it “was not about buying businesses or investing in technology, it’s about the capacity that you put onto the marketplace.”

Former chief executive Harriet Green said she had inherited in 2012 “three profit warnings, a huge wall of debt, and a business model that was entirely out of sync with the industry.”

“That’s what I fought for 28 months, 22 hours a day, to change. And my responsibility is that I failed to complete that. This is a brand that was loved, with staff as loyal and as amazing as I’ve seen anywhere in the world,” she added.

Ms Green, who now works for IBM, said she had implemented a strategy that was more focused on technology, but was asked to leave her post by the chairman before she had fully implemented it.

Thomas Cook, whose founder was born during the Industrial Revolution, was Britain’s oldest holiday company before going into liquidation in September. This put around 9,000 UK jobs at risk and left 150,000 holiday-makers overseas, who were repatriated at an estimated cost of £100m to the taxpayer.

Mr Fankhauser last week told MPs on the committee that the company was dragged down by its debts, which reached over £1.4bn in 2018. “I’m sorry for not being able to turn around this company at pace and to really pay back this debt.

“Since 2012 we paid £1.2bn of interest costs and refinancing costs. Imagine if we had only half of that reinvested in the business, we could have been faster,” Mr Fankhauser said.

Former senior Thomas Cook executives told the BBC the company’s debt problems began with the MyTravel merger. “We were told we’re carrying this debt from a deal that was done many years ago and now we’ve got this baggage around our necks,” said one former executive, who asked not to be identified.

“What that means is we have to sell about 2,000 holidays to even pay a very small piece of that debt back. What we’re doing is essentially working to pay back the interest,” she said.