September 22, 2019 by Joshua Marshall No Comments 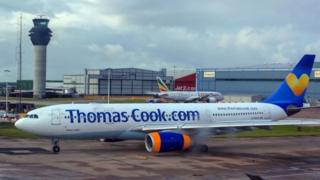 Thomas Cook is to hold crisis talks in a final bid to secure a rescue deal.

The meeting with its biggest shareholder and creditors is understood to be scheduled for Sunday morning at City law firm Slaughter & May.

The tour operator could fall into administration within days unless it finds £200m in extra funds.

It comes as holidaymakers staying at a hotel in Tunisia owed money by Thomas Cook were reportedly prevented from leaving the resort until it was paid.

The government has been urged to step in to bail out the company amid fears its collapse could leave about 150,000 British tourists stranded.

Concerned customers have been reminded on social media that they have Atol protection – a sort of industry-backed insurance – “in the event that Thomas Cook goes into administration”.

The travel firm also reassured customers on Saturday night that flights continue to operate as normal.

Guests at the Les Orangers beach resort in the town of Hammamet, near Tunis, said the hotel was refusing to let them leave because of concerns about Thomas Cook’s future.

Customers have reported that the hotel is asking visitors to pay extra money amid fears it will not be paid what it is owed by the tour operator for bookings.

Ryan Farmer, from Leicestershire, told BBC Radio 5 Live the hotel demanded all guests who were due to leave go to reception “to pay additional fees, obviously because of the situation with Thomas Cook”.

He told the Stephen Nolan show: “I’d describe it as exactly the same as being held hostage.”

The Transport Salaried Staffs Association (TSSA) union, which represents staff at the struggling travel company, has called on Business Secretary Andrea Leadsom to save Thomas Cook “no matter what”.

Government sources suggest ministers are reluctant to help the firm.

TSSA general secretary Manuel Cortes told Mrs Leadsom it was up to the government to save thousands of jobs and to allow Thomas Cook to “flourish”.

She added that “the government must consider stepping in and taking an equity stake to avoid this crisis”.

BBC business editor Simon Jack reported on Saturday that government sources had questioned the financial wisdom of stepping in to save the company.

He said the government did not see its options as being between spending £200m to help Thomas Cook with its cash shortfall or £600m to repatriate its British customers abroad.

One of the world’s largest travel companies, Thomas Cook was founded in 1841 to operate temperance day trips, and now has annual sales of £9bn.

Chloe Hardy from Leicestershire is due to get married in Zante in October and booked the wedding package with Thomas Cook back in June 2018.

Chloe and her fiance will also have 33 family members flying out, with their trips costing more than £33,000 in total.

With the big day looming, Chloe is frustrated by Thomas Cook’s handling of their booking.

“I have emailed the wedding concierge and co-ordinator, neither has got back to me. We are unsure if we will be able to fly. Although it’s Atol-protected I have booked three weeks’ leave from work and there’s no guarantee that I will be able to get time off if I had to rebook.”

“We’ve had constant questions from our family that we are unable to answer,” she added. “This is causing great concern, worry and stress to all of us involved.”

Thomas Cook’s financial difficulties have mounted over the past year, culminating with the agreement in August of a rescue deal led by its biggest shareholder Fosun.

In July, Thomas Cook produced a business plan saying that it needed £900m in refinancing, up from a previous estimate of £150m. The £900m would come from Fosun, the group of creditors and some other investors.

Thomas Cook succeeded in finding a backer to provide the additional £200m, but the BBC understands it has since pulled out.

The firm has blamed a series of problems for its profit warnings, including political unrest in holiday destinations such as Turkey, last summer’s prolonged heatwave and customers delaying booking holidays because of Brexit.