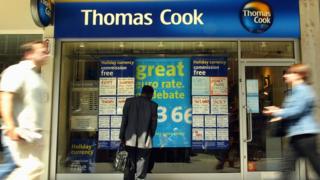 “Don’t just book it – Thomas Cook it!” is a phrase etched in the British memory.

Over the years one of the world’s best known holiday brands has taken millions of holidaymakers around the world, responding to technological advances in transport and social trends.

Its history is also the history of how we have spent our holidays and explored an increasingly accessible world.

“There’s an incredible fondness” for the brand, says travel commentator Emma Coulthurst. “We have grown up with it.

“You would go into your local travel agent, get your brochures, look at your brochures and go back again as a family. It was an event, booking was part of the whole experience.”

Roots in the railways

Although it is now best known for its trips abroad, when cabinet-maker Thomas Cook founded the business in Leicestershire in 1841 it was for more local excursions.

A former Baptist preacher, he wanted to offer working class people a form of educational entertainment to divert them from drinking which he saw as at the root of Victorian social ills.

He harnessed the UK’s newly built railways to offer his first 12 mile trip from Leicester to Loughborough, at the cost of a shilling per head (around £3 in today’s money).

Those travelling were so-called “temperance supporters” – supporting the prohibition of alcohol.

The visit was such a success that Thomas Cook repeated it over several summers on behalf of Sunday schools which laid the foundations for the business.

By 1855, after having pioneered trips around the British Isles and to London’s Great Exhibition, Thomas Cook set his sights across the Channel to Paris where the International Exhibition was being held.

His commercial tour there, linked to other European destinations, was a huge success.

The company flourished, fuelled by the growing middle classes and their desire to travel.

Thomas’ son, John Mason Cook, eventually took over running the company from his father, who died in 1892.

It stayed in family hands and, in the first quarter of the 20th Century, Thomas Cook’s grandsons added winter sports, motor car tours and commercial air travel to its offerings.

At the end of the 1920s it changed hands for the first of many times when the grandsons unexpectedly sold the business to the Belgium owner of the Orient Express.

But as World War Two broke out, it was nationalised by the British government as part of British Railways, to save it from the Nazi occupation.

The post-war years were characterised by a holiday boom in the UK. For Thomas Cook, this meant taking holidaymakers on package holidays abroad but also to its Welsh holiday camp in Prestatyn.

“I see them as a pioneer in organised travel,” says Ms Coulthurst, from holiday price comparison website TravelSupermarket, describing how people went on package holidays as children and later as adults with their own families.

“They were in all of the main package holiday destinations.”

But competition from other businesses also grew.

Thomas Cook was taken private in the 1970s and expanded its network of High Street travel shops through a string of acquisitions.

Then in 1992 it was bought by Germany’s third largest bank, the Westdeutsche Landesbank.

Its next owner in 2001 was another German company, C&N Touristic AG, which quickly rebranded the whole business as Thomas Cook. More acquisitions of shops and travel businesses continued across the world, including India.

Through its long history, it is the 21st Century that the company has found hardest to adapt to.

The digital age has seen a revolution in travel. The internet and the rise of budget airlines have made holidays cheaper and more accessible than ever before.

Its history left it with expensive overheads – hundreds of shops and thousands of staff.

Acquisitions left it with high debt levels, and little ability to respond to the headwinds of the travel market. The hurricanes, heatwaves and currency fluctuations that have hit the company so hard over the last few years.

“I think the reasons are very complex,” says Amie Keeley, the head of news at Travel Weekly.

She cites some “questionable decisions” years ago, when the company was under a different management and decided to expand its shop network at a time when more people were going online.

“In the short term, last summer’s extended heatwave was a big reason. And they have also cited Brexit saying consumers are less confident,” she said.

“However a lot of them are booking them in different ways now,” she adds.

“Thomas Cook has 560 travel agents on the high street, it used to have more. That’s bricks and mortar, they have overheads.”

She says Thomas Cook was left competing with low-cost airlines as well as rivals with a big online presence, and says: “But [Thomas Cook’s] online presence isn’t as strong. They are seen as a predominantly high street shop business.”

She also says in North Africa – where Thomas Cook has an “extremely strong package holiday presence” – there has been political unrest, such as the ban on flights to Egypt’s Sharm El-Sheikh, which has affected the tour operator.

But Thomas Cook has retained a dedicated following, taking 19 million people from the UK and other countries on holiday each year.

“It’s an iconic travel brand that has been in existence for 178 years,” says Ms Keeley from Travel Weekly, adding it is “much-loved” both by consumers and those in the travel industry.

Even the company’s competitors did not want to see Thomas Cook collapse, she adds, not just because of the wider impact on the industry but also from an “emotional and heritage point of view”.

“A lot of people have worked for Thomas Cook or work with them, so everyone is rooting for them.”

For its loyal customers and for its 22,000 staff members, the company has stayed true to its roots – democratising travel and in the words of Thomas Cook himself making it “a social idea”.