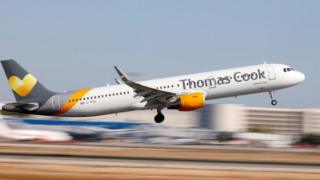 Thomas Cook is already trying to sell its fleet of planes

Troubled travel firm Thomas Cook says it has agreed a rescue deal with investor Fosun Tourism, its banks and a majority of its bondholders.

The UK tour operator said in July it was working to secure new investment from Fosun, a major shareholder.

The new deal would see the Chinese group take control of the business at the expense of other shareholders.

Thomas Cook’s lending banks and bondholders will contribute a further £450m for 75% of the airline and up to 25% of the tour operator business,

The plan will result in a significant dilution in existing shareholders’ interests, the company said, but that it had decided it was the best way to secure the future of the group for all its stakeholders.

“It means the oldest brand in travel will continue to deliver good-value travel,” said Simon Calder, travel editor at the Independent. “A lot of uncertainty that people have, including staff, will be settled by this deal.

“But it begs the question – is Thomas Cook going to be able to differentiate itself sufficiently and be able to deliver exciting experiences and good value?”

The firm – which was founded in Market Harborough in 1841 to run temperance day trips – has annual sales of £9bn, 19 million customers a year and 22,000 staff operating in 16 countries.

The travel firm has issued three profit warnings in a year and is struggling to reduce its debts.

Thomas Cook has also been trying for a long time to sell its airline business.

The firm has had a chequered history, including being nationalised in 1948 – when it became part of the state-owned British Railways – and owning the raucous Club 18-30 youth brand, which it recently closed after failing to find a buyer.

However, just as the travel world has progressed from temperance day trips, so the modern business and leisure market is also changing, and at a far faster pace than in previous decades.

The firm is being buffeted by a number of factors: financial, social and even meteorological, with last summer’s heatwave affecting bookings.

As well as weather issues, and stiff competition from online travel agents and low-cost airlines, there are other disruptive factors, including political unrest around the world.

In addition, many holidaymakers are now putting together their own holidays and not using travel agents.