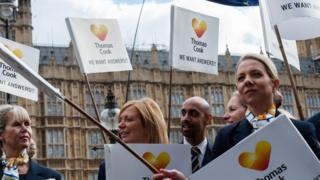 Audit firm EY, which signed off on Thomas Cook’s financial health before its collapse, also wrote a report used to award its former boss a £5m bonus.

Senior EY staff will on Tuesday appear before a panel of MPs investigating Thomas Cook’s collapse.

The audit firm, which also faces an investigation by the Financial Reporting Council, declined to comment.

Christine Cooper, chair in accounting at the University of Edinburgh’s Business School, questioned the ability of auditors to provide truly independent advice when they are paid for by the company they audit and, as in the case of EY, may have provided them with other advice in the past.

“These are smart people, but how could they get this so entirely wrong?” said Professor Cooper.

Pilot Dave Crichton, who joined Thomas Cook from MyTravel in the 2007 merger, said he was “angry” about the company’s collapse “because I think it was resolvable”.

“I fly the planes, I see how many people are on them, I know what the seat prices are. And you think where I was, was an absolute cash cow.”

Internal Thomas Cook documents seen by the BBC show its airlines business, which employed Mr Crichton, was on track to make £129m in profit this year – but he still lost his job when the wider group collapsed.

“It was a really cash rich company which just spent on businesses that came with debt. That’s… the biggest failing, that no part of it was salvageable,” he said.

More on this story

Thomas Cook, whose founder was born during the Industrial Revolution, was Britain’s oldest holiday company before being put into liquidation in September.

The collapse cost around 9,000 UK jobs and left around 150,000 holiday-makers stranded overseas, who had to be repatriated at an estimated cost of £100m to the taxpayer.

Its chief executive at the time, Peter Fankhauser, last week told MPs on the business, energy and industrial strategy select committee that the company was dragged down by its debts, which reached over £1.4bn in 2018.

“I’m sorry for not being able to turn around this company at pace and to really pay back this debt.

“Since 2012 we paid £1.2bn of interest costs and refinancing costs. Imagine if we had only half of that reinvested in the business, we could have been faster,” Mr Fankhauser said.

“We were told we’re carrying this debt from a deal that was done many years ago and now we’ve got this baggage around our necks,” said one former executive, who asked not to be identified.

“What that means is we have to sell about 2,000 holidays to even pay a very piece of that debt back. What we’re doing is essentially working to pay back the interest,” she said.

The year after the MyTravel deal, Mr Fontenla-Novoa was awarded a £5m bonus under Thomas Cook’s “Secured Synergies Bonus Plan”.

Its annual report shows this was paid following “an independent review of synergy benefits” undertaken by EY in September 2008.

“These additional synergies include improved terms negotiated with accommodation providers and overseas agents together with increased hotel settlement income.

“Such synergies being enhanced as a consequence of a healthier negotiation position post merger,” the annual report said.

In 2018, EY (which changed its name from Ernst & Young in 2013), said it had “nothing to report” in respect of claims by Thomas Cook’s directors that “the entity will be able to continue in operation and meet its liabilities as they fall due”.

In May 2019, Thomas Cook reported a £1.5bn loss for the first half of its financial year and issued the third in a series of profit warnings.

Around £1.1bn of that loss was caused by the decision to write down the value of MyTravel.

By then, EY warned there was “significant doubt” whether Thomas Cook could continue as a going concern.

“All of them have questions to answer about the extent to which they were asking the tough questions the directors didn’t want to answer,” she said.

Mr Fontenla-Novoa declined to comment. He is due to face the select committee on 23 October.

With reporting from Luke Denne.

File on 4’s Crash Landing: The demise of Thomas Cook is on BBC Radio 4 on Tuesday 22nd October at 20:00 BST and available afterwards on BBC Sounds.