Thomas Cook: Why did prices rise for new flights? 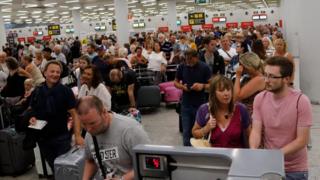 Prices have soared for customers scrambling to rebook flights after the collapse of Thomas Cook.

In the case of Fraser Mallen and his wife, replacement flights for a trip to New York for next month are costing more than £6,000. Others are reporting steep increases too.

So are the price hikes simply due to a sudden rush of demand, with hundreds of holidaymakers forced to change their travel plans at the last minute? Or is something else going on?

Some horrified travellers want to know if other airlines are exploiting the opportunity to put up prices and rake in profits? In other words, is this what is known in the US as “price gouging”?

How do airlines set ticket prices?

Many factors influence the ticket price, including how many seats are available and how many people are looking for tickets, the popularity of certain routes and times of the day, plus other factors such as what has happened to ticket sales over the previous 12 months.

Thanks to sophisticated computer algorithms, these days airlines can alter prices minute-by minute. So when Thomas Cook passengers logged on to buy replacement flights on Monday morning, the airlines computer systems would have registered a huge new spike in interest, triggering an automatic response.

But humans do still have a hand in pricing, according to industry expert Tim Jeans, chairman of Newquay Cornwall Airport and former managing director of Monarch Airlines.

He says revenue managers will intervene to manage automatic systems from time-to-time, for example in December when sales are slow they might want to keep prices high in anticipation of the January rush.

Peter Morris, chief economist at Ascend consultancy, and a veteran with 25 years in aviation, says approaches do differ between airlines.

But he says typically airlines will sell tranches of tickets with prices increasing as long as sales are going well. But that algorithms are likely to be programmed to respond to actual sales rather than just search interest.

What is happening to prices now?

Lots of people who have had to find new flights to replace the ones they had with Thomas Cook have found prices are higher, in some cases three times the original cost.

That has a knock on effect for anyone else trying to book a trip for those dates too.

Mr Jeans says there has definitely been a strong supply and demand element over the past few days.

“If you were a holiday company, why wouldn’t you want to sell them for more? People are complaining about prices going up, but they are providing alternative flights at short notice.”

Price gouging is a term, largely used in the US, to describe when a seller raises the prices of goods or services to an unreasonable or unfair level, often as a result of a sudden increase in demand.

Some Thomas Cook customers have accused airlines of cashing in on the holiday firm’s demise, by pushing prices sky-high.

“There is righteous indignation and accusations that companies are gouging the consumer,” says Mr Jeans. “But holiday firms are facing six months of winter ahead, so they are probably looking to make hay while the sun shines.

“Notwithstanding the collapse of Thomas Cook, they would normally have got just three or so weeks of good business left. Then we are into the dark days of winter – when they will have too many seats to sell.”

Peter Morris is chief economist at Ascend aviation consultancy, and a veteran with 25 years in the industry. He says: “Passengers might ascribe other motives, but it is simply supply and demand.

“It would be naive to assume that if you have five people bidding for a flight seat it would be the same price as if just one person wanted it.”

“I think things will have calmed down in the next few weeks,” says Mr Jeans. “If people have seen big price fluctuations, and they are able to wait for now before booking future holidays, then I would say sit tight for now.”

And he says that by the next summer season the fact that Thomas Cook has gone bust will not make much difference.

“Maybe other firms will look at say Glasgow to Turkey, which is a popular route, and if they see a lot of demand they might make a pricing decision based on that.”