Thomas Cook worker: ‘I’ve been thrown under a bus’ 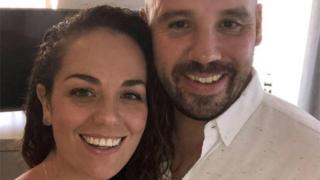 Thomas Cook staff say they have been stranded overseas and fear they will not receive thousands of pounds in wages, following the collapse of the world’s oldest tour operator.

Thomas Cook went into administration in the early hours of Monday morning after negotiations to raise fresh funding failed, leaving 22,000 jobs at risk worldwide – including 9,000 in the UK.

Peter Fankhauser, the chief executive of the firm, apologised to staff and customers after the collapse.

Staff told the BBC how the closure has affected them.

‘I feel let down’

Married couple Hayley and Dan worked at Thomas Cook for a combined total of 34 years before they lost the jobs they loved.

Dan, 41, a pilot for the firm for 19 years, was told of the collapse by email before the official announcement was made at about 02.00 GMT.

Meanwhile Hayley, 36, a member of the cabin crew for 15 years, was watching the news unfold at home.

Hayley, who did not want to give her surname, told the BBC: “At first, we were devastated at learning the news.

“Now it transpires that it seems to have been a long time coming.

“I feel let down. I feel like I’ve been thrown under a bus.”

The couple are due £8,000 in wages next Monday, but do not expect to receive them on time.

Hayley added: “It was a good wage between us. Dan had worked overtime, we had a holiday to Florida in May to pay for, now we can’t afford it.

“We have a bit of savings to cover the mortgage, and we are lucky we have family that can help in the short term, but we desperately need to get Dan, the main breadwinner in our house, a new job by Christmas.”

The couple from Manchester have two young daughters, aged five and three, to provide for.

She added that crew and pilots had been supporting each other with advice on signing on for jobseekers’ allowance and help with mortgage and council tax repayments.

“It’s a very real and immediate problem we have – we all have mortgages going out next week that we can’t pay for”, she said.

“I don’t think there’s a fix within the week. I know a lot of crew have been ringing various organisations and just crying. I rang my gym earlier on Tuesday to cancel my membership and just cried down the phone to them.”

The couple are expecting to receive fact sheets and individual case numbers by post so they can reclaim money owed to them.

The mother of a Thomas Cook entertainment worker based in Cyprus says “vulnerable” young staff have been left to fend for themselves.

The woman, who did not wish to identify herself or her daughter, told the BBC that she had to pay £480 for the 19-year-old to fly back to the UK.

She said: “There is no one helping the other vulnerable young people who are out in other countries.

“The workers who are left in these countries have been on minimum wages of €500 (£440) per month. They don’t have the means to get home.”

“They were put in touch with the British consulate, and were told there is nothing they could do for them because they’re not Atol or Abta protected, and that it was up to the company’s insurance to get them back home.

“When she arrived into work yesterday she was told she had to work, even though the company had gone into administration overnight.

“They said they needed everyone who was part of the team to stay until the last Thomas Cook holidaymaker has left.

“Anyone who decided not to stay had to write a letter of resignation.”

The woman’s daughter was on a six-month contract with the company, and believes she will not be eligible to claim back any lost pay.

David Crighton, a Thomas Cook pilot for 20 years, said losing his job had felt “like a bereavement”.

Mr Crighton, from Cheshire, fears he will not be paid his £12,000 salary for this month, saying “it won’t be coming any time soon.”

He said: “I worked pretty much everyday for a month for nothing. I am probably one of the lucky ones because my wife is in full time employment and I could pay my side of the mortgage for six months.

“The human effect of this is outrageous…the small people are going to be the ones that are really struggling.

“The first people to get paid should be the staff.”

He said he fears it will now be a “bun fight” to get another pilot’s role, and may have to factor work abroad into his job search – though he says he needs Thomas Cook to sign his pilot’s license and flying hours for him to do this.

He added that some of his fellow crews were still stranded overseas, including one in Las Vegas, and were facing eye-watering prices for seats to fly home on another airline.

The crew in Las Vegas have now been given free flights home by another airline, he said.