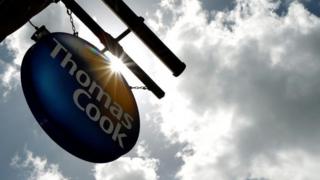 The UK accountancy watchdog has launched an investigation into the collapse of travel firm Thomas Cook.

The Financial Reporting Council’s (FRC) probe will look at the audit of the company by accountancy giant EY for the year ending 30 September 2018.

The FRC’s enforcement division will carry out the investigation and has the power to impose unlimited fines and suspend individual accountants.

Thomas Cook has had three chief financial officers over the past two years, and has also faced questions about its accounting methods.

Rachel Reeves, chair of the Business, Energy and Industrial Strategy Committee, said last week that there were questions to be asked about the firm’s “accounting practices”, with suggestions that they improved the chances of executives being paid large bonuses.

EY is one of the so-called Big Four accounting firms in the UK. It took over as Thomas Cook’s auditor from PWC in 2017.

Announcing its inquiry the FRC said it would “keep under close review both the scope of this investigation and the question of whether to open any other investigation in relation to Thomas Cook, liaising with other relevant regulators to the fullest extent permissible”.

The FRC said the investigation would first look at whether EY had a case to answer, and if it did so then the two sides would convene at a tribunal where the accountancy firm – or individual accountants – would have a chance to defend any allegations against them.

The FRC also said that if an accountancy firm admitted wrongdoing in the early stage of any inquiry, then it would reduce the size of any potential fine levied against it.

Earlier this year the UK’s competition regulator recommended a major shake-up of the UK’s accountancy market, but stopped short of calling for the Big Four accountancy firms to be broken up.

The Competition and Markets Authority (CMA) said auditing and consultancy services should be entirely separate. Its recommendations follow the collapse of high-profile companies such as construction firm Carillion, which was audited by KPMG.

The government has already fast-tracked the Insolvency Service’s investigation into Thomas Cook’s demise, with Business Secretary Andrea Leadsom asking the official receiver to look into whether bosses’ actions “caused detriment to creditors or to the pension schemes”.

In May, Thomas Cook reported a £1.5bn loss for the first half of its financial year, with £1.1bn of the loss caused by the decision to write down the value of My Travel, the business it merged with in 2007.

In those accounts EY warned there was “significant doubt” whether Thomas Cook could continue as a going concern.

By September, Thomas Cook had secured a £900m rescue deal led by its largest shareholder Chinese firm Fosun in August, but a recent demand from its banks to raise a further £200m in contingency funding put the deal in doubt.

Meanwhile, the Civil Aviation Authority (CAA) has announced that it has now returned three quarters of the 150,000 Thomas Cook customers due to fly back to the UK between its collapse last Monday and Sunday 6 October.

Some 115,000 holidaymakers have now been flown back to UK in the first eight days of the repatriation operation. The CAA said 7,000 people are due to fly back on Tuesday on 39 flights.

Richard Moriarty, CAA boss, said: “As we start the second week of our flying programme, we remain firmly focussed on the enormity of the challenge we still have to deliver.”