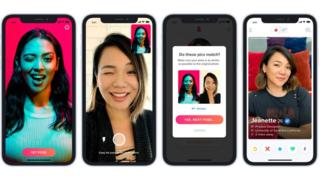 Tinder is adding a panic button and other safety features to the dating app.

The new functions will include emergency assistance, location tracking, and photo verification.

Tinder will offer the features first in the US from 28 January, but didn’t say when they will be available globally.

Parent company Match Group – which also owns PlentyOfFish, OkCupid and Hinge – aims to roll out the features on its other dating platforms later this year.

Match Group said it had invested in Noonlight, which provides the online emergency response services and personal safety products that Tinder will use.

Before meeting someone, users will be able to save information about the person and when the date is taking place.

If they then hit the panic button emergency services will be alerted with the details, along with accurate location data.

It will employ human-assisted Artificial Intelligence (AI) to check that profile pictures uploaded to app, with users asked to verify their identity by taking several real-time selfies.

Match Group chief executive Mandy Ginsberg said it will be the first dating company to invest in an emergency response service.

“A safe and positive dating experience is crucial to our business,” she said.

“We’ve found cutting-edge technology in Noonlight that can deliver real-time emergency services – which doesn’t exist on any other dating product.”

Match Group did not say how much it had invested in Noonlight.

Dating companies and other online platforms, have been criticised for not doing enough to protect their users.

In recent months Uber and Airbnb announced new safeguards in the wake of questions over their safety issues measures.