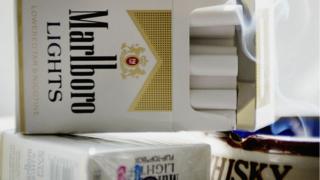 Tobacco giants Philip Morris International and Marlboro-maker Altria are in talks to re-unite, more than a decade after the two firms separated.

With Philip Morris worth some $120bn and Altria $88bn, a deal would create a $200m-plus industry powerhouse.

The news hit the share prices of cigarette competitors, with British American Tobacco down 3%.

The companies’ confirmation of the talks came a day after Wells Fargo analyst Bonnie Herzog said Juul, 35%-owned by Altria, would have an ideal partner for its international expansion in Philip Morris.

Juul is investing in overseas growth at a time when it faces increased regulatory scrutiny over the health of its products in the US.

Both Altria and Philip Morris International (PMI) make Marlboro cigarettes, the world’s best selling cigarette – Altria in the US and PMI in the rest of world.

PMI also makes the Parliament and Virginia brands, and has its own e-cigarette division which the company says on its website will eventually replace traditional tobacco.

Analysts said the rationale behind the tie-up was to face up to declining cigarette sales, which fell 4.5% globally last year according to research group Cowen.

Altria has diversified in recent years beyond traditional tobacco, taking stakes in wine, beer and cannabis companies, as well as Juul.

In April, Phillip Morris won approval to sell a heated tobacco product called IQOS in the US. Unlike combustible cigarettes, IQOS devices heat tobacco-filled sticks wrapped in paper, generating an aerosol that contains nicotine. They are different from Juul’s e-cigarettes, which vaporise a nicotine-filled liquid.

Any merger deal would need to be approved by the companies’ respective shareholders and regulators.