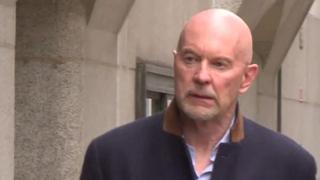 Prosecutors said the executives created a bogus agreement for advisory services so they could pay Qatari investors extra fees for investing.

The defendants deny charges of fraud.

The Serious Fraud Office told the court that in the 2008 banking crisis Barclays needed to raise billions of pounds from private investors.

But the Qataris drove a hard bargain, demanding commissions from the bank more than twice as high as other investors were getting in exchange for investing £2.05bn at the height of the financial crisis.

Barclays executive Roger Jenkins agreed to pay the difference and created a bogus agreement with Qatar for advisory services, prosecutors said. It was the second such agreement that year.

Mr Jenkins, together with finance director Chris Lucas, were responsible for dishonestly hiding the extra payment by means of the agreement, the court heard.

“The Qatari demand for investing had to be satisfied. The real fees for investing were not disclosed and once again, the instrument of fraud, an advisory services agreement was produced,” said prosecutor Ed Brown QC.

“Despite the fact that it committed Barclays to pay more than a quarter of a million pounds, the letter was only a little longer than a single sheet of paper”, the jury heard.

“You may wish to bear in mind that by the time… Barclays was already the purported beneficiaries of the advisory services provided under a very similar [agreement]. It had already agreed to pay £42m on those so-called ‘advisory services'”.

“The complete lack of any negotiations as to the nature of the services for £280m or their value is just one indicator of its fundamental dishonesty,” Mr Brown said.

He added that “in order to conceal the existence of the huge additional payments to the Qataris, it was necessary that the public documents contained serious and dishonest representations as to the true financial picture of the investment.”

The agreement was not mentioned in public prospectuses or subscription agreements relied on by investors taking part in the second capital raising by Barclays in the autumn of 2008.

Today was the second day of a retrial of three top Barclays executives – the only criminal trial in the UK of senior bank executives since the 2008 crash.

Roger Jenkins is charged with two counts of fraud and two of conspiracy to commit fraud in connection with two capital raisings by Barclays in June 2008 and October and November 2008.

Co-defendants Tom Kalaris and Richard Boath are each charged with fraud and conspiracy to commit fraud only in connection with the earlier capital raising in June 2008.