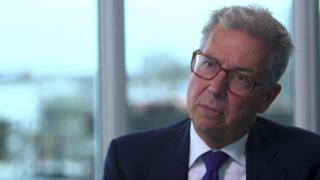 One of the world’s leading fund managers has been forced to resign after the BBC discovered he had broken investment rules.

Panorama has discovered evidence that suggests he was secretly acquiring shares for his own benefit in some of the same companies as his funds.

Mr Denning, who had worked at the firm for 36 years, denies any wrongdoing.

The 62-year-old fund manager left his job five days after Panorama wrote to Capital Group about the findings of its investigation.

Capital Group – which manages almost $2 trillion of assets – said Mr Denning was no longer with the firm.

“We have a Code of Ethics and personal investing disclosure requirements that hold our associates to the highest standards of conduct. When we learned of this matter, we took immediate action,” it said.

Fund managers are not supposed to invest in the same companies as their funds, because they could potentially profit at the expense of investors.

This is because their size means the funds can drive up a company’s share price when they invest. The fund manager could use this power to push up the share price in the companies where they have personal investments, rather than picking the companies that offer the best returns for investors.

The Panorama investigation discovered that shares were bought on Mr Denning’s instructions through a secretive fund based in Liechtenstein.

Capital Group funds also invested in all three companies, and the investments in Mesoblast and Eros were made by funds that Mr Denning himself helped to manage.

In the case of Hummingbird Resources, Mr Denning appeared to have another potential conflict of interest as the company was set up and run by his son-in-law.

An expert on the financial rules told Panorama that the private purchases by Mr Denning could represent a serious conflict of interest.

Michael Ruck, investigations partner at the law firm TLT, said: “The whole point behind the regime, in relation to declaring conflicts of interest, is to protect investors.

“If there was an intention by the fund manager to financially benefit themselves, then that does raise serious concerns in relation to their actions.”

The stakes in the three companies were ultimately held through an offshore entity called the Kinrara Trust. It was set up and controlled by Mr Denning.

Mr Denning’s lawyers deny that he owns the shares in the three companies because they say he is not a beneficiary of the Kinrara Trust.

“Our client did not declare his interest in the Kinrara Trust to his former employers because he had been irrevocably excluded as a beneficiary. He believed that he had complied with all of his relevant duties.”

However, Panorama has seen evidence that Mr Denning was behind the share purchases in the three companies and documents show the Morebath fund was regularly included in a summary of his personal assets.

Mr Denning appears to have named the Liechtenstein-based fund after the village of Morebath in North Devon. He owns a nine bedroom house, Morebath Manor, and 21 acres of parkland in the village.

The fund manager also owns luxury homes in Chelsea and the Bahamas.

Mr Denning used to work for Capital Group in London and was approved by the City watchdog, the Financial Conduct Authority until 2018.

However, four of the funds he managed were aimed at American investors and he had been working from the company’s office in Los Angeles.

Panorama also discovered that the Kinrara Trust owned Kinrara International – a company that profited from a controversial energy deal in Senegal.

Kinrara International made $22m after the exploration rights to a huge gas field off the Senegalese coast were sold to BP.

Experts have told Panorama that they believe Mr Denning should also have declared this – because Capital Group had investments in BP and another company involved in the deal called Kosmos Energy.

Mr Denning’s lawyers say he has never been a legal or beneficial owner of Kinrara International.

Panorama Can You Trust the Billion Pound Investors? is broadcast on Monday at 20.30