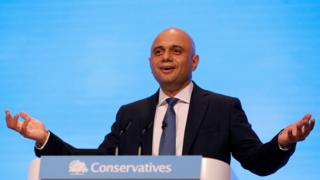 Chancellor Sajid Javid has pledged to raise the National Living Wage to £10.50 within the next five years.

He will also lower the age threshold for those who qualify from 25 to 21.

Speaking to a packed hall at the Tory Party Conference, Mr Javid said the policy would “help the next generation of go-getters to get ahead”.

Mr Javid also confirmed £25bn for road projects, £220m for bus improvements and £5bn for digital infrastructure in his speech, along with extra funding for youth services.

The Tories have made a raft of spending announcements so far at their party conference in Manchester.

But the conference has been overshadowed by allegations that Boris Johnson squeezed the thigh of a journalist during a lunch in 1999 – which the prime minister denies.

Charlotte Edwardes made the claims in a column in the Sunday Times, and said the PM did the same to another woman in the room.

The BBC’s Laura Kuenssberg said a rumour had been circulating at the conference the other woman was journalist Mary Wakefield – the wife of the PM’s chief adviser Dominic Cummings – but she released a statement saying “nothing like this ever happened to me”.

With the prime minister looking on from the audience, Mr Javid told his party the living wage pledge would make the UK “the first major economy in the world to end low pay altogether”.

And he said cutting the threshold to 21 would “reward the hard work of all millennials”.

“The hard work of the British people really is paying off,” he said.

“It’s clear it’s the Conservatives who are the real party of labour – we are the workers’ party.”

Other pledges made by the chancellor included:

The Youth Investment Fund will be focused on building up to 60 new centres and refurbishing 360 old ones so that young people have “somewhere to go, something to do and someone to talk to”.