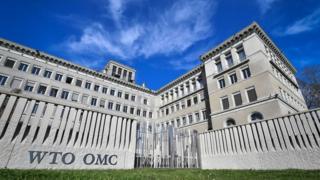 The World Trade Organization is facing a crisis in its system for resolving disputes between its members.

It has an appeal “court” that is the final arbiter on such disputes and which is about to become unable to function.

WTO rules say three judges have to hear each case. On 10 December the number goes below that level. Only one will be left. The terms of the other two come to an end, and no replacements have been chosen.

In fact there isn’t even a process under way to find any. The reason is that the US has refused to allow the recruitment of new judges.

Other WTO member countries have repeatedly proposed to start a selection procedure. At the end of November more than 100 members called for that but the US alone said no. It’s the only country that has objected at any stage during this stand-off.

Global trade flows will fall to a 10-year low as a result of trade tensions, says the WTO

In the quarter of a century since the WTO was established, its system for settling disputes has been one of its main functions. A former director general Pascal Lamy has called the system the WTO’s crown jewel.

It has also been described as “probably the busiest international dispute settlement system in the world”. But it is now in danger of seizing up. Not quite completely – there may some options for countries to work around the absence of an appeal court, or the Appellate Body to give its official title, but they are second-best and may not be accepted by some countries.

What is the US’s objection? Perhaps the biggest issue is that the US accuses the WTO dispute system of “judicial overreach” – essentially that it interprets the WTO rules in a way that creates new obligations for WTO members.

One area that particularly grates in Washington is dumping, when a foreign supplier sells goods abroad more cheaply than at home. The US and others have used a disputed method for assessing whether goods have been dumped and how much the price is below what it should be.

It is known as “zeroing”. It’s not explicitly prohibited by the WTO rules, but the Appellate Body took the view that it was in effect against the spirit.

Yet it is not just about specific cases; it is a general concern that the US has about the rulings going too far, that they in effect create new WTO law.

The US also has some concerns about procedural issues, such as the Appellate Body not issuing its rulings as quickly as it is supposed to, and judges continuing to hear cases they have already started even after their terms have ended.

And it is not just the current US administration led by President Trump that has had this concern.

A recent statement by the US delegation at a WTO meeting stated: “For more than 16 years and across multiple US administrations, the United States has been raising serious concerns with the Appellate Body’s overreaching and disregard for the rules set by WTO members.”

It is not even the first time that a US administration has been uncooperative on Appellate Body appointments. Under President Obama, the US opposed a second term for a South Korean judge and even for an American chosen by a previous administration.

But on those earlier occasions, the US did not block the appointment of new judges. Critics thought the US then was damaging the credibility of the WTO’s dispute system, but it did not stop it functioning.

It is also true that some of the US concerns are shared by other WTO members. But none of them appear to believe that disabling the appeal system is the right way forward.

This time the US is raising the stakes.

President Trump is far less accepting of the WTO than his predecessors were. He has threatened to pull the US out of the organisation and has claimed on Fox News that the WTO was set up “to benefit everybody but us”, adding, “we lose the lawsuits, almost all of the lawsuits in the WTO.”

That is not actually true but the remark is an indicator of how much he evidently dislikes the WTO. And President Trump’s approach to the WTO has been described as part of an “assault on the global trading system”.

Other elements in this approach include action against China without having first got a ruling from the WTO’s dispute system, and tariffs on steel and aluminium imports imposed ostensibly on the grounds of national security, but seen by many commentators as motivated by a desire to protect US producers from competition.

The prospective incapacitation of the Appellate body is certainly a problem for the WTO and its dispute settlement system. The first stage ruling is not binding on the countries involved if one of them appeals. So if there is an appeal, the dispute is in effect on hold indefinitely and countries can’t get authorisation to retaliate.

But that doesn’t mean it can’t function at all. Countries can choose not to appeal. They can agree alternative steps for conducting appeals by arbitration. There is also the fact that WTO members are still subject to the rules, even if the enforcement mechanism is impaired. The risk of harming their reputation may act as some sort of partial restraint on violations of the rules.

There is also other work done by the WTO which will continue, such as help for developing countries in building up their capacity to benefit from trade, monitoring of members’ policies and negotiation.

So the impending loss of the appeal function does not mean the WTO will run off the road altogether. But it does mean it won’t be firing on all cylinders.