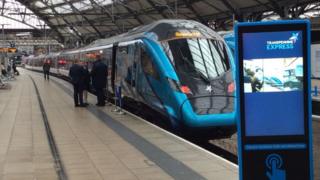 The fleet of 44 new trains will run between Liverpool, Manchester, Newcastle and Edinburgh

TransPennine Express is to give season ticket holders a rebate that cancels out the annual fare increase after disruption to rail services.

The firm’s managing director, Leo Goodwin, said the firm’s performance was “not up to scratch”.

The Department for Transport said the rail firm’s performance in recent weeks had been “completely unacceptable”.

Cancellations on routes in the north-east of England will continue until the end of January, the firm has said.

The firm has been trying to introduce new trains and implement staff training, but blamed delays to these on maintenance and infrastructure issues.

A number of trains between Leeds and Edinburgh, stopping at Chester-le-Street, Durham, Darlington, Morpeth and Newcastle, have been cut.

TransPennine Express said on Monday that customers who held a season ticket between 1 October and 31 December 2019 “will be eligible for a 3% rebate, which will more than cover the 2.8% average increase on regulated fares”.

Mr Goodwin said: “We know that our performance was not up to scratch at the end of last year and for this, we really do apologise. We have experienced a number of issues following the introduction of our new trains, resulting in disruption to a number of our customers journeys with us.

“I would like to thank our customers for continuing to travel with us and it is only right that we compensate them for the recent disruption.”

A spokesperson for the Department for Transport said: “TransPennine Express’ performance in recent weeks has been completely unacceptable.

“We understand how deeply frustrating this is for passengers, who should not have to put up with continued poor performance, and we will not tolerate continued significant reductions to services.”

Transport Secretary Grant Shapps has “demanded immediate explanations from the operator, Network Rail and rolling stock manufacturers, and will be convening an urgent meeting to determine how they will improve services for passengers,” the spokesperson added.

If a rail firm is falling down on its contractual obligations, the Department for Transport can take measures ranging from demanding remedial action to taking the franchise over.

“We have been clear with the operator that they must take urgent steps to address their poor performance problems and, if appropriate, we will take action under the terms set out in the franchise agreement,” the spokesperson said.

“Trains must run on time” has been a mantra of the Transport Secretary since he took up his post in the summer.

The opposite has been true on parts of the UK’s railways so far this winter.

Passengers on that network had a torrid time in the autumn and say things have only slightly improved since then.

Season ticket holders there have already been given a rebate so their fares don’t increase this year.

Andy Street, the West Midlands Mayor, has given the company an ultimatum to get its house in order by the end of this month.

South Western Railway is also under pressure to deliver a more punctual service.

And then there is the case of Northern. That company’s future hangs in the balance.

One theme is a tendency by train companies to try and deliver overly-ambitious timetables which they are ultimately unable to deliver.

Train companies have to try and live up to commitments they made to government under their franchising agreements.

But the franchising system of today is now widely seen as far too rigid and that’s why the government’s rail review will soon announce deep reform to the structures that underpin our railways today.

A number of rail operators have either offered refunds or pledged to improve performance recently.

South Western Railway, which like TransPennine Express is owned by transport giant First Group, pledged on Monday to increase the number of trains running on time.

“I also know that the recent strikes have had a very significant impact on our passengers and employees and I am determined to find a resolution.”

In December, West Midlands Trains said passengers would not pay the season ticket fare rise after a “drop in performance”.

Rail operators have been under pressure from Mr Shapps over their performance since he took over the role in July.