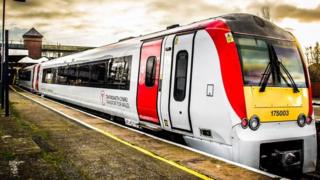 Poor performance has been blamed for the fines

A train company contracted to run Transport for Wales services, KeolisAmey, has been fined £2.3m for poor performance.

Economy minister Ken Skates said the penalty notices were “vital” to get the company to improve, saying the company had not lived up to what was agreed.

Recent improvements must continue, he added. The company took over the £5bn franchise in October 2018.

The company was awarded the franchise by the Welsh Government in 2018.

The day-to-day contract is managed by Transport for Wales – a part of Welsh Government which also provides the branding the train services use.

In December the organisation saw cancellations following the introduction of a new timetable. The company blamed staff shortages.

“So far, something in the region of £2.3m in penalty notices have been issued to KeolisAmey,” Mr Skates told the assembly’s economy committee.

He said the money would be reinvested in rail services.

KeolisAmey has been running services since October 2018

Vikki Howells, Labour AM for Cynon Valley, told the committee she was dealing with constituents who faced disciplinary action in work because of their lateness, have lost wages and had to spend cash on bus fares because of recent disruption.

Simon Jones, Welsh Government director of economy infrastructure, told her the contract used a measure called “passenger time lost” – part of that had “driven” some of the penalty notices.

He said it focuses on the “busiest journeys” – creating more of a problem for the train company if there were problems at rush hour.

Mr Skates said the proportion of trains arriving within three minutes of the scheduled time had improved by 6% in the “latest period”.

He did not want to be issuing penalty notices. “However it is something I feel is absolutely vital in order to incentivise better performance and to ensure passengers know when performance is not what people expect money is being returned.

“Performance has not been what has been expected and has not lived up to what the contract stated and what was agreed.”

He told the committee a break clause in the contract exists.

“If failure was to be seen in the future of course we would have to respond accordingly by looking at the contract,” he added.

Caerphilly Labour AM Hefin David welcomed the fines: “I have had assurances from Transport for Wales that things are set to get better through 2020 and I will be monitoring this as a committee member and in my constituency.”