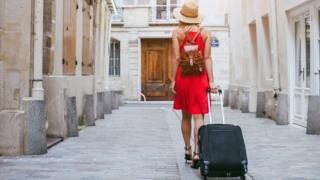 Complaints from holidaymakers who believe they have been scammed by a travel agent are being investigated by police, the BBC can reveal.

Customers of Hayley King’s London-based Around the World Travel business have reported turning up at hotels to find their rooms had not been booked.

The BBC spoke to 32 people who claimed to have had their holiday plans ruined, losing an average of about £3,000 each.

Ms King was understood to be abroad and could not be reached for comment.

However, BBC analysis of the business model suggested Ms King was using a Ponzi or pyramid-style selling scheme to book the holidays for her customers.

Those who booked with Ms King early did get prices lower than the market rate.

But as word of the deals spread, dozens of newer customers who thought they were getting discounted deals were actually paying for other people’s flights and hotels.

Zoe Smith, from Bedfordshire, was due to travel to Dubai at Easter after Ms King was “highly recommended” by a friend.

She was sent a booking reference but when she went to check-in with her airline her details had disappeared.

Ms Smith said she was unable to contact Ms King, who she discovered had booked a flexible ticket.

That had allowed Ms King to cancel the booking at the last minute and claim a refund for herself.

Ms Smith said she lost more than £5,000 from her dealings with Ms King because she paid using a bank transfer rather than a credit card, which would have allowed her to claim the money back.

“I felt absolutely devastated that we’d spent all that money,” she said.

‘She ruined my dream honeymoon’

Effi Gounaris planned to go to the Maldives with her new husband for their “dream honeymoon”.

She said she paid £5,000 to Ms King for the trip – about half the price of other deals being advertised.

But on the day she planned to surprise her husband with the booking confirmation, she was informed by her airline her flights had been cancelled.

Mrs Gounaris then contacted her hotel to find it had also not been paid for.

“My heart jumped in my throat,” she said. “I feel embarrassed. Never in a million years did I think I would be a victim to a holiday scam.

Ms King’s business collapsed in April and her customers have been unable to contact her. Some have reported Ms King to the Metropolitan Police.

In a statement, the force said: “Detectives from the Met’s Economic Crime Unit are investigating an allegation of fraud relating to an individual taking payment for travel bookings which fail to materialise.”

It added that no arrests had been made.

You can see more on this story on Inside Out South on BBC One at 19:30 BST on Monday 30 September and afterwards on the iPlayer.