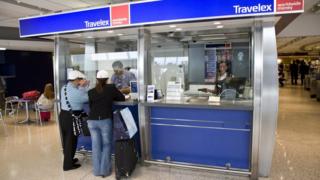 The problem stems from provider Travelex, which is still working to bring back services more than a month after it suffered a major cyber attack.

Customers are able to buy in branches, but cannot order money online or over the phone.

It is understood the currency firm aims to start restoring services this week.

Travelex had to take down its website after the hack was discovered on New Year’s Eve.

A gang called Sodinokibi claimed to have accessed reams of sensitive customer data and demanded that it pay a $6m (£4.6m) ransom to retrieve it.

Cashiers resorted to using pen and paper to keep money moving at bureau de changes in airports and on high streets but orders online were suspended.

Meanwhile, banks reported that their supply of notes from Travelex had dried up and were forced to apologise to customers.

Lenders that use Travelex also include Virgin Money and HSBC.

On Monday, RBS confirmed it was still not offering foreign currency services online but declined to comment on when its services would be restored.

A spokeswoman for Sainsbury’s Bank said: “We’re continuing to work closely with Travelex in order to resume our online money ordering service soon.”

Travelex, which declined to comment, has said there is no evidence customer data was been compromised by the cyber attack.