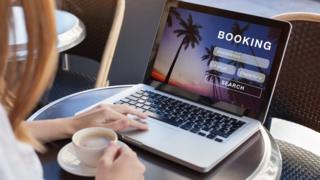 TripAdvisor has hit back at allegations that it is failing to stop a flood of fake reviews that artificially boost hotel ratings.

The travel review site has come under fire from consumer group Which? over what it calls “hugely suspicious” patterns of comments from contributors.

“We are doing this more than any other platform out there,” he told the BBC.

Mr Kay was speaking in response to a Which? Travel survey that looked at 250,000 TripAdvisor reviews for the top 10 ranked hotels in 10 popular tourist destinations worldwide.

Which? said it had reported 15 of those 100 hotels to TripAdvisor as having “blatant hallmarks” of fake reviews.

It said that in the case of one hotel in Jordan, TripAdvisor subsequently removed 730 of its five-star reviews.

Naomi Leach of Which? Travel accused TripAdvisor of a “failure to stop fake reviews and take strong action against hotels that abuse the system”.

“Platforms like TripAdvisor should be more responsible for the information presented to consumers.”

But TripAdvisor’s Mr Kay said the site had already taken action against the reviews in question, independently of the Which? investigation.

“This is something we do every day,” he said. “We have fraud detection tools that are far more sophisticated than those used by Which?”

Mr Kay said its investigators were always on the lookout for suspicious patterns of reviews.

In Italy, he added, TripAdvisor had assisted a prosecution that sent one fake reviewer to jail.

Under an EU directive that has been in force in the UK since 2008, hotel staff who post favourable reviews of their establishment on travel information websites such as TripAdvisor are committing a crime.

Any firm breaking the rules may face prosecution, stiff fines and possibly even jail terms for its staff.

Have you used TripAdvisor as a customer or business? What has been your experience of its reviews? Email haveyoursay@bbc.co.uk.