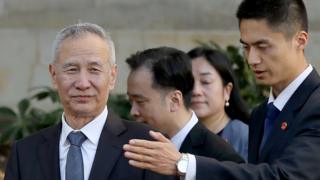 US President Donald Trump sounded an optimistic note at the end of the first day of US-China trade talks in Washington DC.

“We had a very, very good negotiation with China,” Mr Trump told reporters after the talks wrapped up.

Mr Trump will meet directly with Vice Premier Liu He at the White House on Friday.

Earlier reports suggested the Chinese delegation might leave after the first day of talks.

Thursday’s talks kicked off amid a backdrop of renewed tensions, as the US blacklisted 28 Chinese entities over human rights concerns.

They were the first high-level negotiations in more than two months.

“The Chinese side came with great sincerity, willing to cooperate with the US on the trade balance, market access and investor protection,” Mr Liu told the official Xinhua news agency.

Earlier in the week, the US government blacklisted 28 Chinese entities it said were “implicated” in human rights abuses, and imposed additional visa restrictions for Chinese government officials.

The Chinese Embassy in Washington denounced the visa action and said the US accusations on human rights violations were “made-up pretexts” for interfering in China’s affairs.

Although many of the blacklisted entities are government security bureaus, the eight companies named include some of China’s leaders in artificial intelligence.

The blacklist could restrict the access of those companies to US microchips, which they currently rely on for many of their products and services.

Human rights groups and the UN say China has rounded up and detained more than a million Uighurs and other mostly Muslim minorities in detention camps in Xinjiang province.

Although officials are speaking positively about the meeting, few expect more than incremental progress.

“I think China’s looking for a trade truce,” said Einar Tangen, a former economic adviser to the Chinese government.

“At this point, it’s not clear that there will ever be any kind of big breakthrough. The idea in Beijing is that they will never allow Chinese policy to be made in Washington DC.”

The US and China have been locked in a long-running trade spat over a variety of issues.

Over the past 15 months, the world’s two largest economies have imposed tariffs on billions of dollars worth of each other’s goods.

The US has been demanding better protection for US intellectual property, and an end to both cyber theft and the forced transfer of technology to Chinese firms.

It also wants China to reduce industrial subsidies and improve access to Chinese markets to US companies.