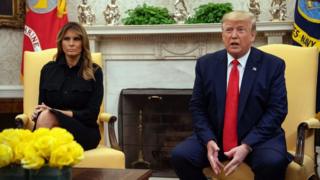 US President Donald Trump has announced that his administration will ban flavoured e-cigarettes, after a spate of vaping-related deaths.

US Health Secretary Alex Azar said the Food and Drug Administration (FDA) would finalise a plan to take all non-tobacco flavours off the market.

There have been six deaths and 450 reported cases of lung illness tied to vaping across 33 states.

Many of the 450 reported cases are young people, with an average age of 19.

Michigan this month became the first US state to ban flavoured e-cigarettes.

Joining Mr Trump at the White House on Wednesday, Mr Azar said it would take the FDA several weeks to distribute the new guidance on e-cigarettes.

He also said the agency would take enforcement action if it determined children were being intentionally attracted to e-cigarettes.

US First Lady Melania Trump this week tweeted that she was “deeply concerned about the growing epidemic of e-cigarette use in our children”.

I am deeply concerned about the growing epidemic of e-cigarette use in our children. We need to do all we can to protect the public from tobacco-related disease and death, and prevent e-cigarettes from becoming an on-ramp to nicotine addiction for a generation of youth. @HHSGov

She was present at Wednesday’s announcement.

“We can’t allow people to get sick and we can’t have our youth be so affected,” he said.

“That’s how the first lady got involved. She’s got a son, together, that is a beautiful young man and she feels very, very strongly about it.

“She’s seen it. We’re both reading it, a lot of people are reading it. But people are dying with vaping so we’re looking at it very, very closely.”

He added that he hoped the announcement would make parents become “tougher”.

“People are going to watch what we’re saying and parents are going be a lot tougher with respect to their children,” said the president.

In a press release shortly after Mr Trump’s announcement, the health secretary said officials “will not stand idly by” as a generation becomes addicted to nicotine.

Acting FDA Commissioner Dr Ned Sharpless said “if we see a migration to tobacco-flavored products by kids, we will take additional steps to address youth use of these products”.

E-cigarette manufacturers such as Juul have been blamed for fuelling childhood addiction through flavoured products such as mango, cream or cinnamon roll.

Juul, which dominates the market, last year stopped selling most of its flavoured devices in order to defuse mounting criticism.

Health officials are still investigating whether a particular toxin or substance is causing the vaping-related illnesses, or whether it’s the result of heavy usage.

The first death occurred in Illinois in late August. Since then, five more have died and hundreds have been sickened across 33 states.

The cause of the vaping illness has not yet been pinpointed by health officials.

THC, the psychoactive chemical in cannabis, was present in some, but not all of the devices used by those who fell ill, say authorities.

The FDA has said many of the products were found to contain significant amounts of vitamin E acetate, an oil used to thicken the vaping liquid.

Several patients have been found with lipoid pneumonia, which occurs when someone inhales fats or oils.