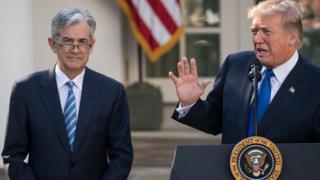 Donald Trump reacted furiously on Friday after the head of the US central bank spoke about the economic risks of a trade war with China.

It followed a speech in which Mr Powell said trade tensions were hitting the global economy and the Fed didn’t have a “rulebook” to deal with the fallout.

Mr Powell was giving a keynote speech at the annual convention for central bankers in Jackson Hole, Wyoming. Although he said the US economy was in a “favourable place” he listed a series of economic and geopolitical risks linked to Mr Trump’s trade war with China.

There are “no recent precedents to guide any policy response to the current situation,” Mr Powell said, adding that monetary policy “cannot provide a settled rulebook for international trade”.

The Fed chief has been under pressure from Mr Trump for a deep cut in interest rates, and has faced a series of derogatory Twitter posts from the president.

But Friday’s attacks were among the most critical. “As usual, the Fed did NOTHING! It is incredible that they can ‘speak’ without knowing or asking what I am doing, which will be announced shortly,” Mr Trump wrote on Twitter. “We have a very strong dollar and a very weak Fed. I will work ‘brilliantly’ with both, and the US will do great.”

In another tweet, which misspelled Mr Powell’s name, he said: “My only question is, who is our bigger enemy, Jay Powel or Chairman Xi?”

China said on Friday it would impose retaliatory tariffs against about $75bn worth of US goods, putting as much as an extra 10% on top of existing rates in the dispute between the world’s top two economies.

Mr Trump indicated he was planning retaliation, but it was unclear what that would be. The president said in a subsequent Twitter post that he would respond to China’s tariffs later on Friday.

Wall Street share markets dived on the escalating tensions, with the three main indexes down between 1.7% and 2% in late morning trading.

Some analysts think Mr Trump has been ratcheting up his criticism of Mr Powell so he can blame the fed chair if the US economy goes into downturn.

Karen Petrou, managing partner of Federal Financial Analytics, told the BBC earlier this week: “Mr Trump doesn’t care what rates are. He cares about who voters think is to blame for slower growth and market turmoil, and he is determined to be sure it isn’t him,” she said.

“What’s an astute politician to do? Find a fall guy distrusted by Republicans, Democrats, independents, populists, and progressives.”