Trump says US and China to resume trade talks 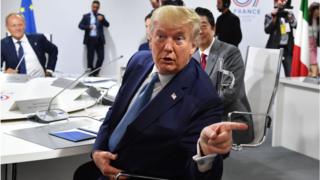 US allies have pressured Donald Trump at the G7 summit, saying the trade war is threatening the world economy

President Donald Trump has said the US and China will “very shortly” resume trade talks after a weekend of escalating tension with Beijing.

On Friday Mr Trump sharply hiked tariffs on billions of dollars of Chinese imports in retaliation for fresh duties from Beijing.

China has yet to comment but earlier called for “calm” to resolve the row.

Mr Trump sent out conflicting messages over the weekend, at first appearing to express regret about the latest tariffs, only for the White House to retract his comments on Sunday.

However, at the G7 summit in Biarritz on Monday he said Chinese officials had made two “very, very good calls” on Sunday night and that Beijing wanted to “make a deal”.

Suggesting his pressure had brought the Chinese back to the negotiating table, he added: “They hurt very badly, but they understand this is the right thing to do.

The US is trying to force Beijing to reform its trade practices, arguing that American firms face an uneven playing field due to issues such as intellectual property theft.

However, US allies have pressured Mr Trump at the G7 summit in France, warning that the trade war is threatening the global economy.

How has the trade war escalated?

The US also said fresh tariffs on an additional $300bn of Chinese goods, announced earlier this month, would now be at a rate of 15% instead of 10%. The first batch of those tariffs will be introduced in September.

In a tweet, Mr Trump said he planned to order US firms working in China to move their operations back to the US, although it is unclear how he could force them to comply.

The moves came after China delivered its latest trade war strike, announcing plans to hit $75bn worth of US goods with new tariffs and hikes to existing duties.

The world’s two largest economies have been locked in a bruising trade battle for the past year that has seen tariffs imposed on billions of dollars worth of one another’s goods.

Mr Trump has long accused China of unfair trading practices, but in China there is a perception that the US is trying to curb its rise.

Sharp falls in the yuan earlier this month prompted the US to officially name China a “currency manipulator”, adding to tensions between the two countries.