Trump says US and China ‘very close’ to trade deal 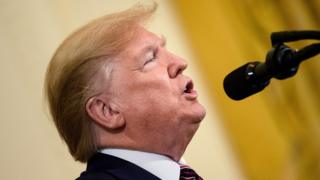 US stocks have rallied after Donald Trump said the US and China were “very” close to a “big” trade deal.

“They want it and so do we!” the US President wrote on Twitter.

The statement comes just days before the US is due to impose another round of tariffs on Chinese goods.

The two sides are negotiating to avoid those duties, looking at a deal that contemplates higher Chinese purchases of US agricultural products and a roll back of existing tariffs.

In October, Mr Trump said such a deal was likely to be completed by the end of the year. That so-called Phase One accord would leave many of the more thorny issues – such as Chinese subsidies – to be dealt with in later agreements.

However, negotiations have dragged on since that announcement. Without progress, the US has threatened to impose tariffs on more than $150bn worth of Chinese exports on 15 December.

Mr Trump’s comment sent the main US stock indexes up more than 1%.

Since the start of the trade war more than two years ago, the two countries have raised tariffs on more than $450bn worth of goods in annual trade.

The US has said the tariffs are aimed at making China give up “unfair” trade practices, including alleged intellectual property theft.

A deal would deliver a victory to Mr Trump, who is under political pressure due to impeachment proceedings led by Democrats.